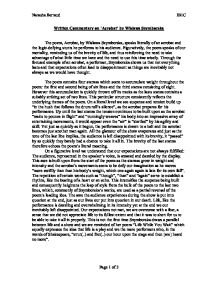 Written Commentary on 'Acrobat' by Wislawa Szymborska The poem, Acrobat, by Wislawa Szymborska, speaks literally of an acrobat and the logic-defying stunts he performs to his audience. Figuratively, the poem speaks of our mortality, reminding us of the brevity of life, and thus reinforcing the need to take advantage of what little time we have and the need to use this time wisely. Through the focused example of an acrobat, a performer, Szymborska shows us that not everything lasts and that expectations often lead to disappointment as things are inevitably not always as we would have thought. The poem contains four stanzas which seem to accumulate weight throughout the poem: the first and second being of six lines and the third stanza consisting of eight. However this accumulation is quickly thrown off its tracks as the lasts stanza contains a suitably striking set of two lines. This particular structure consistently reflects the underlying themes of the poem. On a literal level we see suspense and tension build up "in the hush that follows the drum roll's silence", as the acrobat prepares for his performance. Up until the last stanza the tension continues to be built upon as the acrobat "waits to pounce in flight" and "cunningly weaves" his body into an impressive array of entertaining movements, it would appear even the "air" is "startled" by his agility and skill. ...read more.

and fret(..) our hour upon the stage and then [are] heard no more". One of the most prominent themes of the poem 'Acrobat' is the idea of our mortality and imperfections. Whereas the first stanza promotes a glorified image of the acrobat, the second (and third) gave a deeper insight and reveal the imperfections that the acrobat is liable of. The very word 'acrobat', showcased in the title of the poem, demands a certain respect and revere: he possesses a skill that we perhaps do not, he can move his body with such "ease" and "agility" that he garners our respect and admiration. Yet, in the second stanza, Szymborska allows us to see that he is "crippled", he is not representative of the overvalued image we have of him, but is in fact wanting in certain aspects. Neither bird nor angel as we would like to imagine, he is "missing wings", "shamefully unfeathered" he performs for us, living for the appeasement for others instead of himself which we have seen is a characteristic deemed disrespectful in our eyes. Szymborska promotes the thinking that life is too short to be lived for someone else's happiness at the possible sacrifice of our own and therefore the acrobat is somewhat devalued in this sense. ...read more.

Nothing in life is easy and we have to work hard to achieve something worthwhile but at the same time we have to allow for an appreciation of the wonder that life itself is and not be blinded or burdened by our own preoccupations. In conclusion, through an appropriate structure mirroring the poem's leading idea, and through an abundance of meticulously placed literary devices and an apposite vocabulary, Szymborska successfully conveys the underlying theme that is captured so well in the last line of the poem: We must learn to appreciate "this passing at this very passing moment that just passed", we should value each moment of our lives because before we know it they are gone. Just as the acrobat leaps from "trapeze to trapeze" we move from moment to moment, situation to situation and in order to die without regret we need to live recognizing the value of each of these moments. By giving an insight into the life of an acrobat, Szymborska manages to make a reflection on the human condition, suggesting we take advantage of our lives and of each other. She forces us to confront our mortality and realise that our time on earth is limited and should therefore be appreciated fully. Life is a book and those who do not travel only ever read a page. Natasha Bertaud IB1C Page 1 of 3 ...read more.