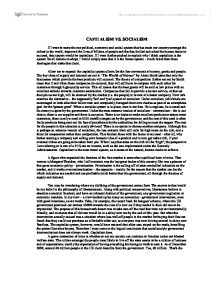 CAPITALISM VS. SOCIALISM If I were to name the one political, economic and social system that has made our country amongst the richest in the world, improved the lives of billions of people and that has fuelled and aided the human desire to succeed, that system would be capitalism. If I were further pushed to explain why I think capitalism is the system for all nations to adopt, I would simply state that it is the fairest system - much fairer than those ideologies that make that claim. Allow me to expand: the capitalist system allows for the free movement of money, goods and people. The key ideas of supply and demand set out in "The Wealth of Nations" by Adam Smith state that only the businesses which provide the best products will succeed. The theory of competition further set out by Smith mean that if and when these companies do succeed, they will still have to compete with each other for customers through high-quality service. This all means that the best goods will be sold at low prices with an excellent attitude towards customer satisfaction. Companies that fail to provide a decent service, or that set their prices too high, will be shunned by the market (i.e. the people) in favour of a better company. Now let's examine the alternative - the supposedly 'fair' and 'just' system of socialism. Under socialism, individuals are encouraged to look after their fellow man and completely disregard their own desires as part of an amorphous goal for the 'greater good'. ...read more.

The culture amongst the people most likely to live off the state seems to be a culture of laziness and of expectations: mainly the expectation of having everything but doing no work to earn it. As of December 2009, around 60 million people in the UK claim benefits from the government. Yes, 60 million. That's the entire population of the UK. Some just settle for the �20 a week per child and an additional �13.20 per extra child in child benefit allowance, a scheme extended to all families, rich or poor; others go all the way by not bothering to look for a job, and instead choose to claim �69.50 per week from the government. In fact, one wonders whether the most hoaching of claimants realises that they are not asking for and getting the government's money, but the riches of another human being's effort. I do know that a large amount of welfare claimants, especially during the recession, are legitimately unemployed and do have the desire to work. However the belief I hold is that each individual is responsible for themselves and themselves only, and if someone enters employment in an industry likely to suffer redundancies and pay-cuts during a downturn, then they should be encouraged to look after themselves by perhaps privately investing money in a savings account for any possible 'bust' in the 'boom/bust' cycle. As the late philosopher Ayn Rand once put it, "Man is the consequence of his own actions." ...read more.

Notice the emphasis on the word "failing" - automatic nationalisation and funding does not help the fact that these companies cannot survive, mostly due to their own errors. Just as the government should not be providing money to less well-off people for making a mess of their lives, they should also not be providing money to the wealthy for failing to balance the books of their own businesses. By choosing the path of socialist nationalisation, the taxpayer will face even harder times during the worst recession for seventy years as government borrowing and spending goes into the red, and taxpayers bail them out. In terms of the banks who spend their money gaily, capitalism would have seen to it that these companies were wiped out due to their own mismanagement. The point I strongly desire to get across when comparing these two systems is their basis. Capitalism is based on free trade and the interaction of individuals. People under capitalism have the choice as to which product to go for and which company to buy from. Under capitalism, government can be limited to its true role of upholding rights and building park benches. That's all. Capitalism is based on liberty and freedom. Socialism is based on control, coercion, an immoral system of tax that closely resembles theft and the disregard for individual rights. It is a system based on the impossible goal of 'equality'. As true as t is, I shall end with this quote by Milton Friedman: "A society that puts equality before liberty will get neither. A society that puts liberty before equality will get a high degree of both." ...read more.