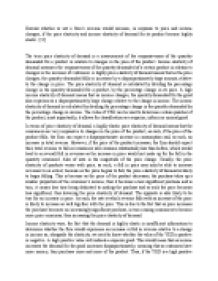 Discuss whether or not a firms revenue would increase, in response to price and income changes, if the price elasticity and income elasticity of demand for its product became highly elastic. [12]

However, if the price of the product increases, the firm should expect their total revenue to fall as consumers will consume substantially less than before, which would lead to an overall fall in revenues as the increase in price would not make up for the fall in the quantity consumed. Also of note is the magnitude of the price change. Usually, the price elasticity of products varies with price, as such, a fall in price may only be able to increase revenues to an extent, because as the price begins to fall, the price elasticity of demand is likely to begin falling. This is because as the price of the product decreases, the purchase takes up a smaller proportion of the consumer?s income, thus it becomes a less significant purchase and in turn, it causes less time being dedicated to making the purchase and as such the price becomes less significant, thus lowering the price elasticity of demand. ...read more.