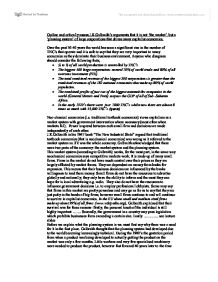 Outline and critically assess J.K.Galbraith's arguments that it is not 'the market', but a 'planning system' of large corporations that drives many capitalist economies. Over the past 30-40 years the world has seen a significant rise in the number of TNC's that operate and it is safe to say that they are very important to many economies as they dominate their business environment. Anyone who disagrees should consider the following facts; * 1/4 to ? of all world production is controlled by TNC's * The biggest 500 large corporations control 70% of world trade and 80% of all overseas investment (FDI) * The total combined revenue of the biggest 200 corporations is greater than the combined revenues of the 182 national economies that make up 80% of world population. * The combined profits of just two of the biggest automobiles companies in the world (General Motors and Ford) surpass the GDP of all of Sub-Saharan Africa. * In the early 1970's there were just 7000 TNC's whilst now there are almost 8 times as much with 53,000 TNC's (quote) Neo-classical economics (i.e. traditional textbook economics) views capitalism as a market system with government intervention where necessary (most often when markets fail). ...read more.

......US defence industry example As mentioned above the planning system also includes the government. This is because there are certain things that even very large firms cannot plan or regulate, so the government will step in to complete the overall planning process. Large corporations cannot control the size of the economy, so the government have the power to control aggregate demand (total spending in the economy). Large firms also cannot control inflation; this is another job for the government to complete. Lastly, large firms can train but they cannot educate workers, so the government supply the skilled persons they need through university funded education. Galbraith believed that these large corporations were not run by managers of the firms as it is popularly believed and so the term technostructure was coined. This term refers to a group of highly skilled technicians which Galbraith believed were the real puppet masters of large corporations. Accountants, economists, marketers, lawyers, scientists, engineers and lobbyists all belong to a technostructure. Galbraith held that the technostructure had considerable power over the company's "decisional and directional process" as managers had to consult the technostructure before making any decisions about the company's future. ...read more.

of the world's population are now surviving on $2 a day or less. 1/2 of the earth's forests have been entirely destroyed, and 1/2 of the world's rivers are in a dire state due to contamination and depletion (www.wikipedia.org). They are often referred to as sadistic psychopaths not caring about anything and anyone but how have TNC's and MNC's gained so much power and affluence you ask; well many governments have removed trade barriers however in the process have also failed to balance this with creating rules and guidelines to prevent the mistreatment of the environment and neighbouring communities. Some may say that guidelines are adhered to however in realty these guidelines are usually 'weak and un-enforced'. In a nutshell Galbraith states that the long-established system of supply and demand has been replaced by corporate planning by firms, using techniques like advertising. Although it has been argued against this belief, the evidence in support of it is overwhelming and if he can be criticised it will be for not delving deep enough into the power of large firms over aspects such as culture and human interactions. In my opinion Galbraith was a giant, both literally (at 6ft 8) and metaphorically in the world of economics and his views will stay with us for decades to come. http://www.halexandria.org/dward318.htm http://www.economictheories.org/2008/08/galbraith-power-of-technostructure.html http://en.wikipedia.org/wiki/Edsel http://www.guardian.co.uk/world/2004/jul/15/usa.iraq Exacerbate ...read more.