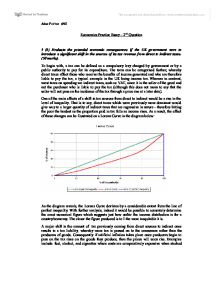 Economics Practice Essay - 2nd Question 3 (b) Evaluate the potential economic consequences if the UK government were to introduce a significant shift in the sources of its tax revenue from direct to indirect taxes. (30 marks). To begin with, a tax can be defined as a compulsory levy charged by government or by a public authority to pay for its expenditure. The term can be categorised further; whereby direct taxes affect those who receive the benefits of income generated and who are therefore liable to pay the tax, a typical example in the UK being income tax. Whereas in contrast, most taxes on spending are indirect taxes, such as VAT, since it is the seller of the good and not the purchaser who is liable to pay the tax (although this does not mean to say that the seller will not pass on the incidence of the tax through a price rise at a later date). One of the main effects of a shift in tax sources from direct to indirect would be a rise in the level of inequality. ...read more.

is that entrepreneurs/workers will feel more inspired to work longer hours in order to earn more money without being taxed quite as much. This will ultimately lead to a boost in productivity levels, and therefore a AS boost to the economy also, as labour is one of the key factors of production - which form the foundations of an efficient economy. Therefore the AD/AS diagram included below can be used to show the effects of these contrasting conditions: The diagram demonstrates how AD1 has shifted leftwards to AD2, and also how there has been a rightwards shift of AS1 to AS2. As a result, P1 has decreased from to P2 aster substantial deflation has occurred. And economic growth has stagnated from highs of GDP1 before shifting back to GDP2. Finally in order to assess the macro consequences of a government switching from direct taxes to indirect taxes, "The Laffer Curve" may be an appropriate economic diagram to explore. The curve relates the rate of taxation in the economy to the total tax revenue received by the government. ...read more.

One thing that is clear however is the fact that Taxes are an unpopular reality for many people; but they are also irrefutably necessary to redistribute the wealth of individuals and corporations to the needy members of society. Without a consistently positive budget deficit, essential public services such as healthcare defence and education would drop substantially in terms of the quality of the service provided (as huge borrowing is not a sustainable long term option for governments). Because all of the above are so fundamental to the health, quality of life and opportunities of the nation, the level of productivity would drop if the public services were not of a sufficient standard. Therefore, perhaps cost cutting measures in addition to considerable efficiency savings may be the better/more popular option. This school of economic thought can usually be attributed to pro free market, libertarian party of the Conservatives in Britain, in many recent election campaigns they have indeed focused upon cutting back on all the unnecessary and unprofitable parts of a large wasteful, interfering state and suggest additional methods of keeping the growing public finances in check. ?? ?? ?? ?? Alex Potter 6N2 ...read more.