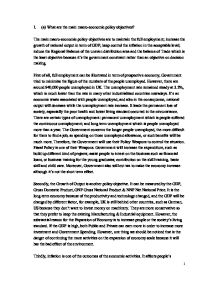 1. (a) What are the main macro-economic policy objectives? The main macro-economic policy objectives are to maintain the full employment; increase the growth of national output in term of GDP; keep control the inflation in the acceptable level; induce the Regional Balance of the uneven distribution area and the balance of Trade which is the least objective because it's the government constraint rather than an objective on decision making. First of all, full employment can be illustrated in term of prospective economy, Government tried to minimize the figure of the numbers of the people unemployed. However, there are around 940,000 people unemployed in UK. The unemployment rate remained steady at 3.2%, which is much lower than the rate in many other industrialized countries nowadays. It's an economic waste associated with people unemployed, and also in the consequence, national output will decrease while the unemployment rate increase. It leads the permanent loss of society, especially the poor health and lower living standard occurred in the circumstance. There are certain types of unemployment: permanent unemployment which is people suffered the continuous unemployment; and long term unemployment which is people unemployed more than a year. ...read more.

The main macro-economic policy objectives are needed to use some policy weapons to control. However, Fiscal and Monetary Policy should be decided together to control the level of activities in economy. Government shouldn't use only one weapon to maintain all the objectives because it has conflicts with each other. (b) Comment on the 'trade-off' that may exist between these objectives. Full employment will lead another effect of high inflation. It's a trade-off of achieving one objective by losing another objective! So, we might say a level of unemployment will have no further upward pressure of inflation. However, we cannot stop the full employment in order to make no pressure on inflation, or vice versa. Can we balance the situation? No, I guess not because the inflation will come by the full employment. We can try to solve problem when it comes. We cannot stop the objective before it achieved. In my opinion, the Government can minimize the effect of those contradictions. We can maintain the level of business activities by cutting the Government spending or increase the interest rate when inflation reaches the unacceptable level. GDP increase by means of inflation increase, although we can produce more in order to increase the productivity, the high inflation will shift the economy. ...read more.

so it shown the position reduction of unemployment rate The labor market performance has been generally good over the last few years. The minimum wage, New Deal, and Working Families Tax Credit Policies make the unemployment was halved since 1993, so there have been signs of improvement in the labor market. The Maastricht Treaty 1993, one of the main EU policy to maintain the united European Countries in the Economic Bargaining: a set of interest rate, a set of Currency, which increased the opportunities to the world trade in other word 'Nationalisation'. It had the big impact on the unemployment and Balance of Trade from 1993 till now. UK Government on most of its objectives had the satisfactory outcomes, for example, the improvement of national output, the control of unemployment, and maintain the inflation at the lower level especially on particular aspects. However, it still has the unbalance of trade that means the import of goods is greater than the export. As a result, it may reduce the national income. The Government should keep the figure above the negative level although as we discussed the Balance of Trade which was the constraint more than the objective of the Government. http://society.guardian.co.uk/commongood/comment/0,8146,459537,00.htm lHow Thatcher stumbled on her Big Idea http://www.guardian.co.uk/Millennium/0,2833,-1978,00.html http://www.guardian.co.uk/Millennium/0,2833,-1978,00.html http://cep.lse.ac.uk/pubs/books/swb_ch1.pdf 1 ...read more.