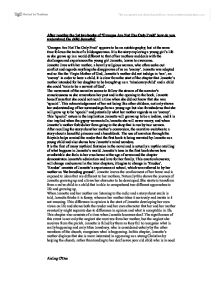 After reading the 1st two books of 'Oranges' how do you understand the child of Jeanette?

After reading the 1st two books of 'Oranges Are Not The Only Fruit' how do you understand the child Jeanette? 'Oranges Are Not The Only Fruit' appears to be an autobiography, but at the same time follows the traits of a bildungsroman. It is the story exploring a young girl's life as she grows up in a world different to that of her mothers and deals with the challenges and experiences the young girl Jeanette, learns to overcome. Jeanette lives with her mother, a heavily religious woman, who often seeks out conflict and regards anything she disapproves of as an 'enemy'. Jeanette was adopted and so like the Virgin Mother of God, Jeanette's mother did not indulge in 'sex', an 'enemy' in order to have a child. It is clear from the start of the chapter that Jeanette's mother intended for her daughter to be brought up as a 'missionary child' and a child she could 'train to be a servant of God'. The movement of the narrative seems to follow the stream of the narrator's consciousness as she remembers her past and in the opening to the book, Jeanette herself says that she could not recall a time when she did not know that she was 'special'. This acknowledgement of her not being like other children, not only shows her understanding of her surroundings from a young age but also foreshadows that she will grow up to be 'special' and potentially what her mother regards as an 'enemy'. This 'special' nature is the implication Jeanette will grown up to be a lesbian, and it is also implied when the gypsy woman tells Jeanette she will never marry, and when Jeanette's mother forbids her from going to the shop that is run by two women. After recalling the story about her mother's conversion, the narrative switches to a story about a beautiful princess and a hunchback. ...read more.

It is the first of many mythical fantasies in the novel and is actually a mythic retelling of what happens in Jeanette's world. Jeanette's tone in the first book shows how comfortable she feels in her own home at the age of seven and the chapter demonstrates Jeanette's admiration and love for her family. This emotion however, will change and unravel in the later chapters; it begins to change in 'Exodus'. 'Exodus' consists of Jeanette's experiences at school, which was referred to by her mother as 'the breeding ground'. Jeanette leaves the confinement of her home and is exposed to ideas that are different to her mothers. Naturally this shows the journey of Jeanette growing up and allows her character to be developed. She starts to transform from a na�ve child to a child that is able to comprehend two different approaches to life and growing up. When Jeanette and her mother are listening to the radio and a story about snails is told, Jeanette thinks it is funny, whereas her mother takes it seriously and insists is it not amusing. This difference in opinion is the start of Jeanette developing her own views on life and shows both the reader and her own character that her and her mother eventually might separate due to difference in opinion and what is acceptable in life. This chapter also consists of a time when Jeanette becomes deaf. The significance of this event is not only the neglect she receives from her mother, but the neglect she receives from the parish. Jeanette is failed by them as they fail to recognise what is really happening and only Miss Jewsbury, who is considered unholy by the other members of the church, recognises what is happening. In this chapter, Jeanette's mother displays that she is more interested in appearing as a strong Christian by helping the church, rather than tending to her deaf seven year old child who is in need of attention from a mother. ...read more.

Jeanette's mother's indifference to her daughter foreshadows Jeanette's future rejection. The introduction of Elsie Norris shows Jeanette entering a world that accepts more than her mother's world does. The introduction of literature other than the Bible shows Jeanette's acceptance, and again foreshadows a world where one day Jeanette will be accepted, even if it is not by her mother. Towards the end of this chapter, Jeanette's imagination grows and she thinks up a tale based on two shapes she learned about in Maths, Tetrahedron and Isosceles. Tetrahedron's discovery that no emotion is the final one again represents a lesson that Jeanette is learning in her own life. The safety and holiness Jeanette felt in her home and beliefs in the first chapter, is beginning to change, and the development of her character and her broadened understanding of the world shows her ability to understand and take in what her mother rejects. At school, Jeanette is regarded different as she relates things in school to what she has been taught at home, exposing her Biblical and religious knowledge. The fact that she is regarded as different from the other children due to this foretells her transformation into a lesbian, since as a lesbian she will not fit into the 'normal' world. Finally, the first two chapters are used to introduce Jeanette, and establish what has gone on for the first seven years of her life. They help to establish why she is the way she is, and indicate that she is not going to follow in her mother's footsteps and become the 'missionary child' she wanted. Finally, the second chapter shows Jeanette accepting new teachings, and shows her being accepted by someone, Elsie Norris. Elsie is seen as 'unholy' to everyone in the parish, so perhaps it is indicating that if Jeanette is to live her life the way she wants, she is going to go against the religious teachings mentioned heavily in the first chapter and accept that she will always be 'special'. ?? ?? ?? ?? Aisling O'Dea ...read more.