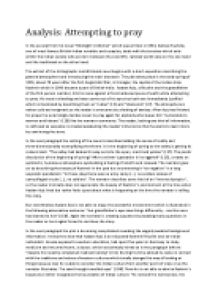 Analysis of an excerpt from Rushdie's &quot;Midnight's Children&quot; : Attempting to pray

﻿Analysis: Attempting to pray In the excerpt from his novel ?Midnight?s Children? which was written in 1981, Salman Rushdie, one of most famous British-Indian novelists and essayists, deals with the tensions which exist within the Indian society who are torn between the scientific, rational world-view on the one hand and the traditional on the other hand. The extract of the histiographic metafictional novel begins with a short exposition describing the general atmosphere and introducing the main character. The plot takes place in the early spring of 1915, about 70 years after the first Anglo-Sikh War, in Srinagar, the capital of the Indian state Kashmir which in 1846 became a part of British-India. Aadam Aziz, a Muslim and the grandfather of the first person narrator, hits his nose against a frost-hardened piece of earth while attempting to pray. His nose is bleeding and tears come out of his eyes but both are immediately justified which is illustrated by describing them as ?rubies? (l.5) ...read more.

The narrator describes some kind of an ?inverse dystopia ?, so the reader ironically does not appreciate the beauty of Kashmir?s environment at the time when Aadam Aziz lived but rather feels upset about what is happening at the time the narrator is telling this story. But nevertheless Aadam Aziz is not able to enjoy the wonderful environment which is illustrated in the following adversative sentence: ?but grandfather?s eyes saw things differently... and his nose had started to itch?(l.31f). Again the narrator is creating suspense by awaking many questions in the reader so he is again forced to continue the story. In the next paragraph the plot is becoming complicated revealing the eagerly awaited background information. It becomes clear that Aadam Aziz is an educated Kashmiri Muslim and an Indian nationalist. He was exposed to western education, had spent five years in Germany to study medicine and returned home, a doctor, which was already hinted at in the paragraph before: ?despite his recently completed medical training? (l.11). ...read more.

Europe has effected a dislocation in respect of his origin and religion which is highlighted by the experience he had with his German friends: ?he learned that India- like radium-had been discovered by the Europeans (...) he somehow was the invention of their [the European?s] ancestors? (l.61-66). By using the verbs ?discover? and the noun ?invent? it becomes clear that Western people rather objectify resp. do not respect Indian cultures and values which led Aadam into his inner crisis or as the narrator explained right the beginning: ?leaving him at vulnerable to women and history? (l.10). At the end of the story the narrator refers back to the exposition that there will be a ?permanent hole? (l.80) in Aadam?s heart ?trapped between belief and disbelief? (l.70f). So coming to the end, one can draw the conclusion that Salman Rushdie intends to make the colonial traces and especially the impacts of western ideology on Indian society a subject of discussion. Aadam Aziz is not able to live with the changes the British brought to India and is struggling for a compromise coping both the western and traditional Indian norms and values. ...read more.