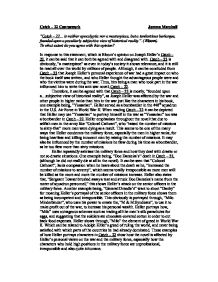 &quot;Catch - 22&amp;#133; is neither apocalyptic nor a masterpiece, but a tendentious burlesque, founded upon a peculiarly subjective view of historical reality&quot;. (Bloom). To what extent do you agree with this opinion?

Catch - 22 Coursework Jemma Marshall "Catch - 22... is neither apocalyptic nor a masterpiece, but a tendentious burlesque, founded upon a peculiarly subjective view of historical reality". (Bloom). To what extent do you agree with this opinion? In response to this statement, which is Bloom's opinion on Joseph Heller's Catch - 22, it can be said that it can both be agreed with and disagreed with. Catch - 22 is obviously, "a masterpiece" as even in today's society it shows relevance, and it is still be read all over the world by millions of people. Although, it can be concluded from Catch - 22 that Joseph Heller's personal experience of war had a great impact on who the book itself was written, and who Heller thought the advantageous people were and who the victims were during the war. Thus, him being a man who took part in the war influenced him to write this anti-war novel, Catch - 22. Therefore, it can be agreed with that Catch - 22 is mostly, "founded upon a...subjective view of historical reality", as Joseph Heller was affected by the war and other people in higher ranks than him in the war just like the characters in his book, one example being, "Yossarian". ...read more.

It allows the modern reader to identify with men such as "Yossarian", whose only battle is his fight to stay alive during the war and get back home in one piece never mind fighting for their country. When, "Yossarian" wants, "Doc Daneeka" to, "ground" him so he does no have to fly and he is told the only way he can be grounded is if he is crazy, he tells, "Doc Daneeka" he is crazy! "Doc Daneeka" tells him, "there is a catch...Catch - 22. Anyone who wants to get out of combat isn't really crazy." Heller show how the bureaucratic trap is accepted by naive soldiers apart from "Yossarian" who seems to be the only one in the novel who can see the whole insanity of the situation. Heller sees the military force as taking away a soldier's individuality. He sees the military force being able to make the soldiers do what they want. The military forces make the soldiers do what they want them to do, and make them believe in the insane system as oppose to it. Heller uses this tactic ironically as the American military air force is using the same kind of mentality as Adolph Hitler, who used propaganda to make the people of Germany do as he pleased; thus resulting in six million Jewish people being killed. ...read more.

Heller still got his opinions on war across to the readers, whether they are modern day readers or readers of past decades. He allowed his opinions to become very realistic; meaning that his own experience affected the way in which he wrote his novel and who he had prejudices against. Yet, he still gave space for the readers to conjure up their own depiction on the war in their own minds, and also allowed space for their own opinions. Even though, Heller's words are still very persuasive as we know that he, himself took part in the war and seen the goings on for himself. Finally, Bloom's opinion was both agreeable with and disagreeable with. Bloom did not seem to appreciate that through Heller's own personal experience of the war he had seen and been affected by the war. He too had been ill-treated by men in a higher status than him. This certainly did effect how Heller presented his characters in Catch - 22. Heller intended to also show the "tendentious burlesque" that occurred during the war in the military force, whether it was through colonels, nurses, doctors, doctors wives or families belonging to those who served in the army base. By Heller adding satirical writing and mockery of the American Air Force to his novel, made Catch - 22 a comical, more interesting and appreciating read. ...read more.

This student written piece of work is one of many that can be found in our AS and A Level Joseph Heller section.

Related AS and A Level Joseph Heller essays