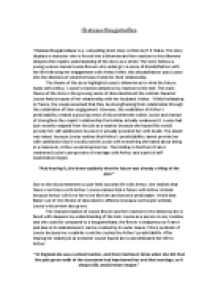 ﻿Chateaux Bougainvillea ?Chateau Bougainvillaea? is a compelling short story written by H.E. Bates. The story displays a character who is forced into a dilemma and her reaction to this dilemma deepens the readers understanding of the story as a whole. The story follows a young women named Louise Bowen who undergo?s a sense of dissatisfaction with her life following her engagement with Arthur Keller, this dissatisfaction puts Louise into the dilemma of what the future holds for their relationship. The theme of the story highlights Louise?s dilemma as to what the future holds with Arthur, Louise?s reaction deepens my reaction to the text. The main theme of the story is the growing sense of discontentment the central character Louise feels because of her relationship with her husband, Arthur. Whilst holidaying in France, the couple assumed that they be strengthening their relationship through the celebration of their engagement. ...read more.

I think that Bates? use of the theme of discontent is effective because as the plot unfolds, Louise?s discontent also grows. The characterisation of Louise Bowen and her reaction to the dilemma she is faced with deepens my understanding of the text. Louise as a person is very creative and she could be compared to a bougainvillaea, the flower is indigenous to France and due to its delicateness it can be crushed by its outer leaves. This is symbolic of Louise because her creativity could be crushed by Arthur?s predictability. After leaving her stable job as a teacher Louise hoped she could dedicated her life to Arthur: ? In England she was a school teacher, and there had been times when she felt that the pale green walls of the classroom had imprisoned her and that marriage, as it always did, would mean escape.? Initially Louise thought married life with Arthur would be exciting and spontaneous and would provide her with the freedom and the chance to show her creativity. ...read more.

The author gives the reader an insight to the predictable nature of Arthur at the restaurant: ? left-handedness ? In this incident Arthur finds the setting of the knives to be humorous, this clearly shows the predictability of Arthur because he is laughing at such a meaningless object thus causing Louise much frustration. Daily Arthur would repeat a phrase e.g. ?all right? Happy?? much to the irritation of his partner. Arthur?s occupation is symbolic to his predictable ways. Arthur earns his living as a draper?s assistant and his job relates to his beliefs because every metre of cloth has a value and so should everything in life. Furthermore, as part of his occupation all Arthur does is measure cloths - he does this on a daily basis, this could possibly be the explanation towards Arthur?s predictability. The author uses setting to emphasise the dilemma Louise is faced with regarding her future with Arthur.Bates uses setting to highlight the different aspects of Louise?s emotional state. ...read more.