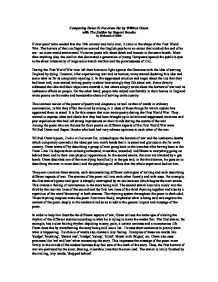 Comparing Dulce Et Decorum Est by Wilfred Owen with The Soldier by Rupert Brooke by Mohammed Bakir If ever proof were needed that the 19th century was truly over, it came in the shape of the First World War. The horrors of that conflagration scarred the English psyche to an extent that marked the end of an era - no more would sentimental Victorian poets talk about death and honour in the same breath. More than anything else, the conflict that decimated a generation of young Europeans opened the public's eyes to the sheer inhumanity of large-scale trench warfare and the pointlessness of it all. During the First World War men left their homes to fight against the Germans with the idea of serving England by dying. However, after experiencing war and its horrors, many started doubting this idea and some went as far as completely rejecting it. In the suppressed emotion and anger about the lies that they had been told, men started writing poetry to show how strongly they felt about war. Some directly addressed the idea and their objections towards it, but others simply wrote about the horrors of war and its loathsome effects on people. On the other hand, people who stayed comfortably in their homes in England wrote poems on the noble and honourable chance of serving one's country. The common notion of the power of poetry and eloquence, as well as that of words in ordinary conversation, is that they affect the mind by raising in it ideas of those things for which custom has appointed them to stand. It is for this reason that men wrote poetry during the First World War. They wanted to express ideas and ideals that they had been brought up to believe and suppressed emotions and past experiences that had left strong impressions on their minds during the course of the war. ...read more.

Owen's reference to his dreams plainly avers that even those who escaped the gas attacks and the bombing and were able to survive, suffered through the knowledge of the monstrosities that occurred during the war. The image of the young man will be forever engraved on Owen's mind. He finally rounds up the poem by channelling his own experiences described in the poem to draw up the conclusion: that war is not sweet or glorious; it is just a pointless and horrific loss of many lives. The last words of the poem, 'Dulce et decorum est pro patria mori' were originally said by Horace. It means that 'It is sweet and glorious to die for one's country.' Owen's uses this line throughout the poem because it is an ideology used by leaders in times of war to excite the troops and get them ready for battle. Owen is trying to show everybody that the saying is a lie and if one is to fight, it should not be for glory of one's country. The language of the poem is simple yet vivid. This choice of frank and plain diction awakens the emotions of the reader, bringing home meaning to the minds of all people and overcoming the social barriers of class and education existing distinctly at that particular time. Thus he allows the message to reach and be understood by a large cross section of the public. The directness of the words and the simplicity of the sentence structures throughout the poem impress the points and various messages that Owen is trying to make, more forcibly and effectively on the reader's mind. It also portrays to the reader a feeling of the soldiers' innocent artlessness thrust into the horrific confines of war. Owen uses strong images and figurative language (such as metaphor, simile, personification and connotation) in his poem in order to help the reader visualise the situation described. ...read more.

Unlike Dulce et Decorum Est, The Soldier has no chronology or rhythm. It is purely based on ideas, ideals, beliefs and hopes just as Dulce et Decorum Est is based on events and experiences. The poem is written as if it is Rupert Brooke's own epigraph, thus making it one of his best-known and most loved poem. The Soldier is a moving poem which carries a beautifully serene and blissful feeling; totally unlike the horrific reality of Dulce et Decorum Est. Brooke starts the poem off by making a very direct, frank and simple statement. The statement is communicated like an innocent child pondering a possibility. This effect is achieved by the earnest and plain introduction of the poem: 'If I should die, think only this of me...' The 'if' that begins the whole poem shows the reader that Brooke does not think that he will die in war. He makes his death sound much less probable than it really would be in war and attempts to persuade the reader that the people fighting probably won't die, they'll just be fighting for a great and noble cause. Also, the 'if' attaches no importance whatsoever to the grave opening statement, as if it would never happen. Despite the childish artlessness, the introductory statement is made to sound solemn and thoughtful, setting the feeling intended by Brooke to accompany the reader all throughout the poem. The first stanza is full of touching and delicate references to England's rich beauty. Brooke writes that, if he was to die, the place where he falls would be blessed with the heavenliness of England. He depicts any fallen soldier who died for England as someone who is special and not just another 'someone' as Owen puts it. He shows each dead man as a carrier of a part of England and he delineates the idea that if an Englishman dies on a foreign field, that 'corner' will be 'for ever England.' This could also be a political reference to the help that England will receive if soldiers die for her by helping their country to gain land. ...read more.