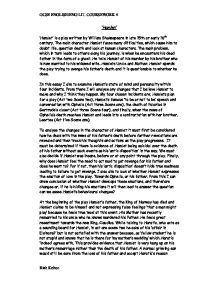 'Hamlet' 'Hamlet' is a play written by William Shakespeare in late 15th or early 16th century. The main character Hamlet faces many difficulties, which cause him to doubt life, question death and look at human characters. The main problem, which in turn leads to others along his journey, is when he encounters his dead father in the form of a ghost. He tells Hamlet of his murder by his brother who is now married to his widowed wife, Hamlets Uncle and Mother. Hamlet spends the play trying to avenge his father's death and it is questionable to whether he does. In this essay I aim to examine Hamlet's state of mind and personality within four incidents. From there I will analyse any changes that I believe Hamlet to make and why I think they happen. My four chosen incidents are; Hamlets plan for a play (Act two Scene two), Hamlet's famous 'to be or not to be' speech and conversation with Ophelia (Act three Scene one), the death of Polonius in Gertrude's closet (Act three Scene four), and finally, when the news of Ophelia's death reaches Hamlet and leads into a confrontation with her brother, Laertes (Act five Scene one). To analyse the changes in the character of Hamlet it must first be considered how he deals with the news of his father's death before further revelations are revealed and then track his thoughts and actions as the play progresses. It must be determined if there is evidence of Hamlet being suicidal over the death of his father without such events as his 'antic disposition' in the way. We must also decide if Hamlet was insane, before or at any point through the play. Finally, why does Hamlet feel the need to act mad to get revenge for his father and does he want to? For if not, then his 'antic disposition' doesn't hide true madness leading to failure to get revenge. ...read more.

He tells her that women are just acting, however this time not in a good sense. He sees their 'painting' of a new 'face' as an act against God to assist them in their 'wanton' lives which makes 'me mad'. Hamlet has been made very anti-women because of his mother and says 'frailty thy name is woman' suggesting he considers the female sex to be weaker and more calculating. Act three Scene Four is another scene staged by Claudius and Polonius. It happens after the play that Hamlet has set up. Taking place in Gertrude's bedroom after Hamlet has considered killing Claudius. He is very emotional from this and it leads to him committing a murder in this scene. Hamlet begins very convinced and triumphant that the Ghost was not lying leading him to feel elated which can be seen in his singing. When seeing Claudius he goes to avenge old Hamlet's death but does not. He feels it would be too kind because he will have confessed his sins and this was considered to grant entry to heaven. Having seen Hamlet's earlier ideas that death ends suffering he would not have wanted Claudius to be free from his sins and Hamlet views it as more revengeful to let him live, for a while. Although, it can be evidence for the procrastinating nature of Hamlet I think it is very cold and calculated. Hamlet wants to kill him when he in his 'incestuous bed' not at a time when he is most angelic. It also provides further proof that Hamlet does not want revenge for his father, and feels more disgrace to him for taking his mother away from him and the crown. As scene four continues, Polonius plans to hide 'behind the arras' to hear Hamlet's conversation with his mother. Polonius instructs her to 'lay home to him' that his 'pranks' have been too outrageous. ...read more.

I think Ophelia's death scene is the most important moment for Hamlet. The concept of life and necessity to act responsibly become clear to him. After this scene there is a significant difference in approach to his revenge. He seems to not be acting mad and the very next opportunity he has to kill the King is seized however, it may not be revenge because Hamlet knows that he is dying. This may be what causes him to be able to act finally. It leads to question whether Hamlet did want revenge but I feel that he now has enough confidence that he no longer needs to justify himself to his father and revenge is not important. He knows has strong views and ideas about anything after death and it no longer scares him. His feelings at the beginning suggest death was not a factor to deter him but I think he was using a hard exterior to fool others and maybe himself. This is further proof that he has matured by the end of 'Hamlet'. Polonius' death marks the death of an immature Hamlet because they are very much alike, both nosey and very wordy. It provides mental recognition for Hamlet that he is changing and his childish way, from such scenes as Gertrude's closest, are not needed anymore. It also provides Hamlet with a thirst for blood and shows him what actions he is capable of. I believe it to be a second key scene for Hamlet. Finally, I think Hamlet is undeveloped emotionally and finds it very hard to deal with his father's death and to hear he was murdered destroys Hamlets life. I feel great empathy with him and understand why he may appear suicidal and mad to some, whereas I do not agree. I think he does remarkably well to deal with the situation and do no think that I could. I don't think he does revenge his father's murder but does not need to. He is a very interesting character who emerges victorious. GCSE ENGLISH/ENG LIT. COURSEWORK 4 Riah Kelton ...read more.