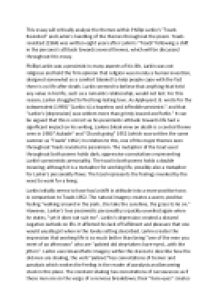 Critically analyse the themes within Phillip Larkin's &quot;Toads Revisited&quot; and Larkin's handling of the themes throughout the poem.

ï»¿This essay will critically analyse the themes within Phillip Larkin's "Toads Revisited" and Larkin's handling of the themes throughout the poem. Toads revisited (1964) was written eight years after Larkin's "Toads" following a shift in the persona's attitude towards several themes, which will be discussed throughout this essay. Phillip Larkin was a pessimist in many aspects of his life, Larkin was not religious and held the firm opinion that religion was merely a human invention, designed somewhat as a comfort blanket to help people cope with the fact there is no life after death. Larkin seemed to believe that anything that held any value in his life, such as a romantic relationship, would not last. For this reason, Larkin struggled to find long-lasting love. As Appleyard. B. wrote for the independent (1993) "[Larkin is] a hopeless and inflexible pessimist." and that "Larkin's [depression] was seldom more than grimly inward and futile." It can be argued that this is correct as his pessimistic attitude towards life had a significant impact on his writing, Larkins bleak view on death is a central theme seen in 1980 "Aubade" and "Church going" 1952 (which was written the same summer as "Toads" 1952.) ...read more.

Larkin gives the reader many contradictions within his two poems, challenging his own opinion and attitude towards working life. However, this last line in the final stanza is one of the most contradicting. Although the toad is seen to be a familiar old chum at this point, there is also a more sinister underlying meaning of death. The last line in the last stanza sees the first full rhyme within both poems, again a contradiction to himself. The full rhyme signifies strength between the toad and the persona in the poem as they have finally come together, and peace has been established. It also signifies that Larkin has come to a definitive conclusion on where he stands in terms of the "toad". The poem has a central theme of poverty, and Larkin portrays himself somewhat as a snob. In 1964, when the poem was written, Britain was still much more a classist society. Larkin's father Sydney was Coventry's city treasurer, and therefore, assuming from this Larkin was bought up in a wealthy middle-class family. Larkin was very well-educated, attending King Henry VIII school in the city; he then went on to study at St. ...read more.

The theme of the imminence of death is seen strongly throughout. The use of enjambment "beyond black-stockinged nurses" creates a feeling of breathlessness that would be felt during death. The "nurses" in the park also signify illness and death. Larkin uses simple sentences after the use of enjambment, such as "not a bad place to be." "yet it does not suit me." these short sentences when read aloud consolidate the feeling of breathlessness. The last line â€œhelp me down Cemetry roadâ€ is a metaphor for death. Overall, Larkin has created a bleak tone within the poem. Larkinâ€™s pessimistic personality intensifies the negativity felt throughout this poem. Regarding the different themes discussed Larkinâ€™s pessimistic personality influences how these themes are approached. Initially, it seems Larkin uses the poem as a vessel to convey his feelings towards work in a cynical way. However, the tone of the poem remains negative; the persona's attitude shifts. After having started to unpick the poem, it becomes clear that work and life with the "toad" is in fact, the more favourable option, than that of the characters described in the poem. The poem is part of the Whitsun weddings collection written by Phillip Larkin in 1964; the collection is dominated by poems with the major themes of the passing of time, loss, and the imminence of death. These themes are seen strongly in Toads Revisited. ...read more.