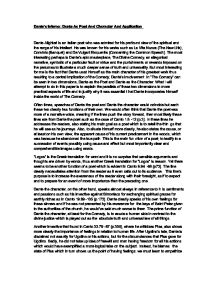 Dante Alighieri is an Italian poet who was admired for his profound view of the spiritual and the range of his intellect. He was known for his works such as La Vita Nuova (The New Life), Convivio (Banquet) and De Vulgari Eloquentia (Concerning the Common Speech). The most interesting perhaps is Dante’s epic masterpiece, The Divine Comedy, an allegorical narrative, symbolic of a particular fault or virtue and the punishments or rewards imposed on the personas to illustrate a much deeper sense of truth and universality. But most interesting for me is the fact that Dante used himself as the main character of his greatest work thus resulting to a central implication of the Comedy; Dante’s involvement in “The Comedy” can be seen in two dimensions, Dante as the Poet and Dante as the Character. What I will attempt to do in this paper is to explain the parallels of these two dimensions to more practical aspects of life and to justify why it was essential that Dante incorporates himself inside the world of The Comedy.

Often times, speeches of Dante the poet and Dante the character would coincide but each these two clearly has functions of their own. We would often think that Dante the poet was more of a narrative voice, meaning if the lines push the story forward, then most likely these lines are from Dante the poet such as the case of Canto 1.8-12 (p.3). In these lines he addresses the readers, also stating his main goal as a poet which is to retell the things that he will see as he journeys. Also, to situate himself more clearly, he also states the cause, or at least on his own view, the apparent cause of his current predicament in the woods, which was because he abandoned the true path. This is the main function of a poet; to testify to a succession of events possibly using cause and effect but most importantly clear and comprehendible images using words.

“Logos” is the Greek translation for word and it is no surprise that sensible arguments and thoughts are driven by words, thus another Greek translation for “Logos” is reason. Yet there seems to be another function of a poet which is evident in Canto 8.94-96 (p73). The line clearly necessitates attention from the reader as it even calls out to its audience. This line’s purpose is to increase the awareness of the reader along with their foresight, as if to expect and to prepare for an event of more importance than the preceding one.

Dante the character, on the other hand, speaks almost always in reference to his sentiments and passions such as his invective against Simoniacs for exchanging spiritual graces for earthly riches as in Canto 19.89-105 (p.173). Dante clearly speaks of his own feelings for these sinners and if he was not prevented by his reverence for the keys of Saint Peter given to the authorities of the church, he would’ve said much worse to them. The prime function of Dante the character, at least for the Comedy, is to exude a human side in contrast to the divine justice which is played out as the absolute truth and universal law of all things.

Another invective that found in Canto 33.79-87 (p.305), where he criticizes Pisa, also shows more clearly the importance of feelings in relation to human life. After Ugolino’s tale, Dante is disdained not exactly for Ugolino or his actions, but for the circumstances that Pisa gave for Ugolino. Sadly, he did not take up idea of freewill and men having freedom for all his actions which would have exemplified a more logical take on the subject. Instead, he blames the state of Pisa which in turn shows us the point of having feelings: we must learn to empathize with other people’s grief and suffering. After all, we live in a world of full of people and God’s commandments ask us to love others.

Having said this, that Dante the poet, just like Virgil the poet, represents reason above all things and Dante the character represents human emotion that which brings individuality to every person too, Dante’s involvement in the Comedy is of two-fold in nature. As one might conclude, Dante is the representation of the Everyman, a representation of all humanity that experiences life’s sufferings and trials to find the soul’s true path - which then brings me to why Dante integrated himself in his own masterpiece: One cannot fully explain or relate experiences to others just by using words; one must experience for himself to entirely grasp even a moment in time. Thus, in Canto 24.72-78 (p.221), when Dante asks Virgil about something that he cannot understand or distinguish, Virgil replies that the only answer is by doing the act itself or by experiencing the act itself. The fact that Dante makes himself the main protagonist of the Comedy is to reinforce and inculcate to his readers that experience will forever be the best teacher- which then brings me to my final point.