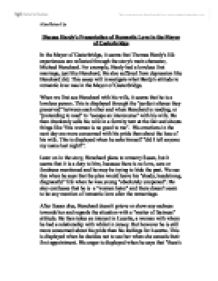 Discuss Hardy's Presentation of Romantic Love in the Mayor of Casterbridge.

Discuss Hardy's Presentation of Romantic Love in the Mayor of Casterbridge In the Mayor of Casterbridge, it seems that Thomas Hardy's life experiences are reflected through the story's main character, Michael Henchard. For example, Hardy had a loveless first marriage, just like Henchard. He also suffered from depression like Henchard did. This essay will investigate what Hardy's attitude to romantic love was in the Mayor of Casterbridge. When we first see Henchard with his wife, it seems that he is a loveless person. This is displayed through the "perfect silence they preserved" between each other and when Henchard is reading, or "pretending to read" to "escape an intercourse" with his wife. He then drunkenly sells his wife in a furmity tent at the fair and shouts things like "this woman is no good to me". His emotions in the next day are more concerned with his pride than about the loss of his wife. ...read more.

His anger is displayed when he says that "there's not an inch of straight grain" in the women. Henchard only seems to like Lucetta when he finds out that Farfrae is interested in her too. His love is metaphorically compared to a "smouldering" fire "fanned by inaccessibility". Throughout the story, Henchard is alone. His lonely character plays a major role in the story line and Hardy uses Biblical quotes to emphasise Henchard's loneliness such as a "less scrupulous Job" and a "repentant sinner". Hardy also uses symbolism to highlight the rivalry between Henchard and Farfrae, through the bread that they fight over and the two wagons parked outside Lucetta's place of residence. The only instances of any love we see is in his friendship with Farfrae and his paternal love of Elizabeth-Jane. His friendship with Farfrae is displayed when he has his arm around Farfrae's shoulder. This friendship perishes when people speak higher of Farfrae than of Henchard. ...read more.

When Lucetta dies, Farfrae is reasoned and calm, showing almost no grief for his late wife,this is displayed when it says that "it was hard to believe that life with her would have have been productive of further happiness". Fafrae then resumes his relationship with Elizabeth-Jane after a respectable period of time. When the wedding plans are being arranged, Farfrae seems to be deadly serious about them. The wedding itself though seems to be a gaiety of Newson's making rather than the couple's. Farfrae is more concerned with money and business, love comes second in the priority list. This is displayed when he asks Lucetta "you are rich?", says that staying at an Inn overnight will put a "hole in a sovereign" and where Abel Whittle gets paid "a shilling a week less". Farfrae seems to be moderate about everything. In the end, neither marriage was successful romantically. The characters are more concerned with other types of love e.g. business and presentation of pride. By Allen Hoten ?? ?? ?? ?? Allen Hoten 11y ...read more.