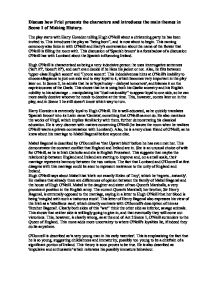 Discuss how Friel presents the characters and introduces the main themes in Scene 1 of Making History.

Discuss how Friel presents the characters and introduces the main themes in Scene 1 of Making History. The play starts with Harry Hoveden telling Hugh O'Neill about a christening party he has been invited to. This introduces the play as "being born", and is now about to begin. This naming ceremony also links in with O'Neill and Harry's conversation about the name of the flower that O'Neill is filling the room with. This discussion of 'Spanish broom' is a foreshadow of a discussion O'Neill has with Lombard about the Spanish influencing Ireland. Hugh O'Neill is characterised as being a very indecisive person: he uses interrogative sentences ('isn't it?', 'doesn't it?'), and can't even decide if he likes his jacket or not. Also, he flits between 'upper-class English accent' and 'Tyrone accent'. This indecisiveness hints at O'Neill's inability to choose allegiance to just one side and to stay loyal to it, which becomes very important in the play later on. In Scene 2, he admits that he is 'loyal today - disloyal tomorrow', and blames it on the capriciousness of the Gaels. This shows that he is using both his Gaelic ancestry and his English nobility to his advantage - manipulating his "dual nationality" to appear loyal to one side, so he can more easily deceive whoever he needs to deceive at the time. ...read more.

This theory is soon proves to be true. He is also described as 'impulsive and enthusiastic' which reiterates his possibly immature behaviour. He greets O'Neill with a very friendly, laid-back attitude. He hugs him and mocks O'Neill about his jacket: not maliciously, though, in a friendly manner. He speaks his mind, and does not have the political or social awareness that other characters have. He has no problem with being very rude to O'Neill about his new wife, telling him to 'keep her for a month and then kick her out'. Lombard's reaction to the news of O'Neill's new wife is much more reserved, saying that he must 'assess the religious and political implications of this association'. This angers O'Neill as he sees it as a marriage of love rather than of personal or political gain. His reserved comments and replies are typical of Lombard: he greets O'Neill with 'How are you, Hugh?', which is very polite and formal compared to O'Donnell's greeting. He is writing a history of O'Neill, something which O'Neill is very apprehensive of. O'Neill believes that Lombard is not the ideal person to write an account of his life, so Lombard is very careful with what he says to Hugh about his plans. ...read more.

This opening scene sets the audience up for the rest of the play in terms of the characters introduced, the themes explored and the message that is trying to be portrayed. It gives the audience information that is not needed immediately, but will be needed later on in the play to link it all together. This also happens for parts of the first scene too. For example, O'Neill makes a passing remark, asking Harry if he's sure 'nobody has heard a whisper'. The audience is not aware of what they are talking about until O'Neill tells O'Donnell and Lombard that he eloped the night before. This links the two events together to complete the picture and gives the audience full understanding of what was going on. This is also what is happening on a wider scale across the whole of the first scene - events not understood at the time, but clarified later on in the next three scenes. The opening scene is the key to a clear picture of the whole events of the play, and even the most minute details of this first scene - relating to characters, themes or historical events - are significant in the overall structure and understanding of the entire play. ...read more.