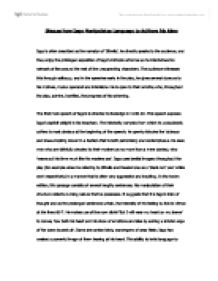 Discuss how Iago manipulates language to achieve his aims

Discuss how Iago Manipulates Language to Achieve his Aims Iago is often described as the narrator of 'Othello', he directly speaks to the audience, and they enjoy the privileged exposition of Iago's intricate schemes as he intertwines his network of lies around the rest of the unsuspecting characters. The audience witnesses this through soliloquy, and in the speeches early in the play, he gives several clues as to his motives, modus operandi and intentions. He is open to their scrutiny who, throughout the play, admire, horrified, the progress of his scheming. The first main speech of Iago's is directed to Roderigo in I.i.40-65. This speech exposes Iago's explicit delight in his treachery. The inferiority complex from which he undoubtedly suffers is most obvious at the beginning of the speech; he openly ridicules the 'duteous and knee-crooking knave' in a fashion that is both patronising and contemptuous. He sees men who are faithfully devoted to their masters as no more than a mere donkey, who 'wears out his time much like his masters ass'. Iago uses bestial imagery throughout the play (for example when he referring to Othello and Desdemona as a 'black ram' and 'white ewe' respectively) in a manner that is often very aggressive and insulting. ...read more.

,it appears that he enjoys teasing the audience in this manner, he has the audacity to claim that his advice to Cassio to appeal to Desdemona to get his job back was exactly what a genuine friend would advise, and, frustratingly, the audience knows that he is right, horrified, they hear how this 'good advice' will be turned against Cassio. By revealing to the audience his plan to 'enmesh them all', they can watch the terrible consequences of his lies unfold helplessly and Iago seems to be proud of the situation he is creating. One feels that he is only revealing his plan to them so that his twisted genius can be apprciated. This follows Samuel Coleridge's view (Omniana, 1812) that Iagos motives for action were his 'keen sense of intellectual superiority' and his 'love of exerting power', he does take great delight in his ability to control those around him with such appaerent ease. ANother soliloquy in which he reveals further plot developmet to the audience is in Act 3, scene 3, it begins with his dismissing his wife Emilia, "Go, leave me" he says after she has just given him the handkercheif which is integral to his furthering the demsie of Othello (his all-consuming goal), and yet recieves no thanks or praise from him showing the poor condition of their relationship. ...read more.

And O you mortal engines, whose rude throats The immortal Jove's dead clamors counterfeit, Farewell! Othello's occupation's gone. (3.3.360) One of the finest examples of this prompting technique is shown with the one word sentence 'Lie'. The double entendre and ambiguity this sentence posseses makes for an incredibly dramtic moment which completes Othello's humilating demise from the honourable war hero he once was. Iago, unsuprisingly, manages to cover himself against every lie that he utters, after all he is not providing Othello with any factual evidence, merely hearsay, which is 'no more than he [Cassio] will unswear'. For a man as broken as Othello now is, it seems fact is no longer a condition required for judgement and decision, even that of murder. Throughout the play, Iago has skilfully displayed his ability to control the actions, and in Othello's case, the thoughts of the other characters in the play, all of which has been done through his control of lanaguage, he has updated the auidence throughout, with his ongoing plans with a sadistic enthuisiasm. So when, in the final scene, the plotting and scheming which he has wholeheartely devoted himself to unravels around his feet, Iago always eager to have the upper hand, tries to retaing what little control he still can by vowing silence. This ensures that neither the charcters, nor the audience, can know Iago's true motivations for his seeming inherent desire to do evil. ...read more.

There is clearly a very good knowledge and understanding of the play evident in this essay. The writer is able to offer thoughtful interpretations, demonstrating the ability to analyse language in detail.

There are some points for improvement. The writer opts for a chronological approach, taking us through the play and choosing key scenes/speeches for analysis. Whilst this can work as a way to structure an essay, it can lend itself to re-telling of the plot, which does happen in this essay. Another way to consider Iago's language would be to focus on key techniques he uses, for example, his use of imagery, other rhetorical devices, his use of syntax, his use of prose/verse/soliloquy, how he adopts different registers/modes of address dependent on his audience and so on. These points can then be used to explore effects of these techniques throughout the play, focusing more on analysis of language rather than re-telling of events. Many of the paragraphs are too short and do not contain developed analysis or a substantial point. There are also numerous spelling errors.

Overall, there are some good ideas, but the essay lacks structure. Clear planning would help to solve this problem.