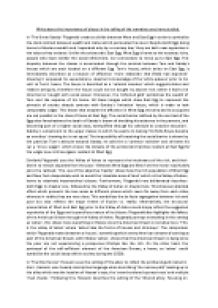 Discuss the importance of setting in The Great Gatsby, The Kite Runner and O What is that Sound

﻿Write about the importance of places in the telling of the narratives you have studied. In ?The Great Gatsby? Fitzgerald creates a divide between West and East Egg in order to symbolise the stark contrast between wealth and status which permeates the novel. Despite both Eggs being home to fabulous wealth and ?separated only by a courtesy bay? they are both near opposites in the values they endorse. Unlike the aristocratic East Egg, West Egg is home to the nouveau riche, people who have neither the social refinement, nor connections to move up to East Egg. This disparity between the classes is accentuated through the contrast between Tom and Gatsby?s houses which are each located on a different Egg. Tom?s house; which exists on East Egg, is immediately described as a beacon of affluence ?more elaborate that (Nick) had expected? showing it surpassed his expectations, despite his knowledge of the ?white palaces? prior to his visit to Tom?s house. The house is described as a ?colonial mansion? which suggests status and relative antiquity, therefore the house could not be bought by anyone rich, rather it had to be inherited or bought with social power. Moreover, the ?reflected gold? symbolises the wealth of Tom and the expense of his home. All these images which show East Egg to represent the pinnacle of society sharply contrast with Gatsby?s ?imitation? house, which is made to look comparably vulgar. ...read more.

American Dream, with lifeless ?ashes?, shows that the American Dream is dying since the poor are not experiencing a prosperous lifestyle like the rich. On the other hand, the portrayal of the self-sufficient element of the American Dream; a home, as ?ashes? could symbolise the social decay within society during the 1920s. In ?The Kite Runner? Hosseini uses the setting of ?the alley? to reflect the profound guilt rooted in Amir. Hosseini uses heavily descriptive language when describing ?the narrow path? leading up to the alley which was the location of Hassan?s rape, the ?snow burdened cypress trees? and multiple ?mud shacks.? Following this, Hosseini describes the setting of the ?littered alley?, focusing on specific details such as the ?slabs of cement? and ?a rusted cast-iron stove with a gaping hole on its side.? The depth of description highlights the strong sense of guilt felt by Amir, since he is a retrospective narrator reflecting on this event 26 years after the rape, which occurred on ?a frigid overcast day in the winter of 1975? yet he can still remember the setting vividly, including the insignificant details such as the ?gaping hole? in the stove. This implies that Amir has reflected countless times upon this event and everything surrounding it, including the setting, symbolising his heavy conscience. However, Amir also mentions the ?blue kite resting against the wall? in the alley copious times, which could suggest it is not guilt which has forced Amir to retain this event in his mind, but his ?key to Baba?s heart?, the kite. ...read more.

Similarly, the soldiers are then described to have ?passed the farmyard already? which continues the suspense. ?Already? suggests they haven?t taken a normal time to travel the distance between the parson?s gateway and the farmyard, implying the soldiers have started to move quicker, rising their threat. Furthermore, the setting of the ?farmyard? is an obvious rural setting which presents this poem to be a traditional ballad. In ?Miss Gee? Auden uses setting to develop characterisation. Miss Gee is described to have ?lived in Clevedon Terrace?, this is repeated several times which reflects the dull life of Miss Gee, since there is nothing interesting about her, information just has to be regurgitated. Alternatively the repetition of her home reflects how she is defined by her surroundings which suggests she is trapped and isolated. Moreover ?Clevedon Terrace? is a contemporary setting in Bristol which makes this a traditional ballad. Miss Gee lived at ?number 83? the rhyme between ?Gee? and ?83? accentuates how she is defined by her environment, isolated. Also ?83? appears random and unimportant which reflects the dull and somnambulatory life led by Miss Gee. Also Miss Gee is said to have ?lived in a small bed-sitting room?, this suggests Miss Gee is discontented with her existence since most people refer to a ?bed-sitting room? as just a bed-sit, Miss Gee?s extension of the word shows her attempt at a more interesting life. ...read more.