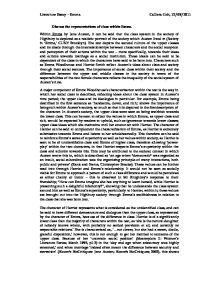 Discuss the representations of class within &quot;Emma&quot;.

Discuss the representations of class within Emma. Within Emma by Jane Austen, it can be said that the class system in the society of Highbury is depicted as a realistic portrait of the society which Austen lived in (Society in 'Emma,' CUNY Brooklyn). The text depicts the societal culture of the upper classes and its ideals through the interrelationships between characters and the social reception and perception of their actions within the text - more specifically, towards their ideas and actions towards marriage as a social institution. These ideals can be said to be dependent of the class in which the characters have said to be born into. Characters such as Emma Woodhouse and Harriet Smith reflect Austen's ideas about class and society through their social statuses. The importance of social class within their society and the difference between the upper and middle classes in the society in terms of the responsibilities of the two female characters reflects the inequality of the social system of Austen's time. A major component of Emma Woodhouse's characterization within the text is the way in which her social class is described, reflecting ideas about the class system in Austen's time period; the upper class and its ideologies in particular. ...read more.

no, I am sure you are a great deal too kind to-but if you would just advise me what I had best do-No, no, I do not mean that-As you say, one's mind ought to be quite made up-One should not be hesitating-It is a very serious thing.-It will be safer to say "No" perhaps.-Do you think I had better say "No?"' In this, the nature of Harriet's relationship with Emma can be seen - Harriet submitting to the classical ideology of the 'upper class knowing better,' emphasizing the importance of class within everyday life in the time period. This is perceived socially as acceptable, in that Emma actually approaches Harriet instead of the other way around, thus allowing her as being seen as 'special' since Emma has picked her out of the unknown/lower classed, instead of the many others out there - this has therefore given her opportunities that she would not normally be exposed to, thus allowing her to increase her class, which may have been a seen as a plea of desperation from her, reflecting the importance of the class system within society. Class struggles can also be said to be portrayed within the plot of Emma through the feminine expectation of Harriet to marry up, since she has an 'uncertain social position and undecided future' (Masterplots II: Women's Literature Series; March 1995) ...read more.

Emma by Jane Austen can be read to reflect the values of the class system of Austen's time period, showing the differences in the priorities of the different classes; as shown in this essay through their opinions towards marriage. In the era in which Austen lived, class and marriage could be seen to be interrelated in that the importance of marriage for the person in question depends significantly upon the class in which they were born into. These can be seen through the above examples, which, in turn, has lead to the difference in the intentions of marriage for both Emma Woodhouse and Harriet Smith, showing the difference in their upbringing and opinions about themselves, most of which their class is based on. These interactions between the characters can be said to further reinforce the instilled values of society and the differences between the upper and unidentifiable classes in the society within the actual characters, such as Emma's socialisation with Harriet, in terms of responsibilities and general demeanours, reflecting the social system of Austen's time and the inequalities within this. This, in turn, reflects the understandings brought upon the reader and the characters' expected duties and roles within the text. ...read more.