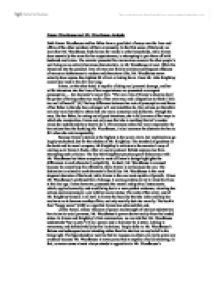 Emma Woodhouse and Mr. Woodhouse Analysis Both Emma Woodhouse and her father have a good deal of sway over the lives and affairs of the other members of their community. In the first scene of the book, we learn that Mr. Woodhouse finds homes for maids in other households, while Emma does essentially the same for her acquaintances, in attempting to pair them off with husbands and wives. The narrator presents this overzealous concern for other people's well being as an entirely harmless characteristic, in Mr. Woodhouse at least. While his intrusions into the personal lives of even non-family relations and frequent effusions of worry are bothersome to readers and characters alike, Mr. Woodhouse never actually does anyone the slightest bit of real or lasting harm. Even Mr. John Knightley cannot stay mad at him for very long. Emma, on the other hand, is capable of doing real personal damage, and her wilful intrusions into the lives of her acquaintance are presented as arrogant presumption - her character's major flaw: "The real evils of Emma's situation [are] the power of having rather too much of her own way, and a disposition to think a little too well of herself." (4) The key difference between her acts of presumption and those of her father is that she has a stronger will and mind than he. ...read more.

(46) Even in comparison to her sister, Emma has the "stronger hand." (241) In truth, Emma is wholly worthy of most of the praise bestowed upon her throughout the book. The most obvious example would be her "ready wit," (66) which Mr. Elton cites in his charade. The obvious problem with Emma's ready wit, though, and all her other powers, is that they are so often put to bad use. Where Mr. Woodhouse's social power is always proved to be harmless, Emma is the one with the potent hands that can at times wreak havoc. At the party at Box Hill, Emma "cannot resist" (342) making a derisive comment to Miss Bates, simply because it is too "clever" to be kept in. The sole extenuating circumstance here (though it is one based on Emma's arrogance) is that she may not have anticipated its full effect - "I dare say she did not understand me." (346) But Emma's misuse of her own power of understanding is evident. The remark is both consciously derisive and deliberately aimed, and the evident pain it causes Miss Bates brings home the reality that Emma's understanding at that moment has become more limited than Miss Bates'. Moreover, the impact of the harm extends both beyond the present moment and beyond the single personal relationship, revealing that unlike her father, Emma has the power to do real lasting damage. ...read more.

Emma's ability to reflect and feel powerfully is what fuels her self-transformation once she directs that power inwards to observe her own heart instead of outwards to mold other people and events. It takes only the right catalyst, namely Mr. Knightley, for Emma to become able to realize her own wrongdoing. She responds to his reprimands about her treatment of Miss Bates, not with the defensiveness of someone truly arrogant but with "anger against herself, mortification, and deep concern." (347) A similar moment of realization and self-chastisement comes at the first big climax of the book, when Emma learns of Harriet's love for Mr. Knightley and realizes her own: "with insufferable vanity had she believed herself in the secret of everybody's feelings; with unpardonable arrogance proposed to arrange everybody's destiny." (383) Emma proves herself capable of the character revolution which her father is not when she gives up her own pretensions to judge the best interests of others. The fact that it is Knightley who sparks Emma' reformation of character might seem to give ultimate power to him rather than to Emma herself. After all, his intrusion into her personal life ends up being the most positive force of the book. But it is important to keep in mind that Knightley is only a catalyst, a stand-in for the author's criticism of Emma's flaws, while Emma shares something like the role of the author herself. Like the playwright or novelist, she learns through trial and error the limitations of power exercised in trying to create and dictate the course of other people's lives. ...read more.