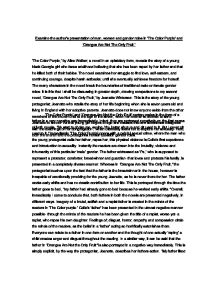 Examine the author's presentation of men, women and gender roles in 'The Color Purple' and 'Oranges Are Not The Only Fruit.'

Examine the author's presentation of men, women and gender roles in 'The Color Purple' and 'Oranges Are Not The Only Fruit.' 'The Color Purple,' by Alice Walker; a novel in an epistolary form, reveals the story of a young black Georgia girl who faces adulthood believing that she has been raped by her father and that he killed both of their babies. The novel examines her struggle to find love, self-esteem, and continuing courage, despite harsh setbacks; until she eventually achieves freedom for herself. The many characters in the novel break the boundaries of traditional male or female gender roles- it is this that I shall be discussing in greater depth, drawing comparisons to my second novel, 'Oranges Are Not The Only Fruit,' by Jeanette Winterson. This is the story of the young protagonist; Jeanette who retells the story of her life beginning when she is seven years old and living in England with her adoptive parents. Jeanette does not know anyone aside from the other members of the church until at the age of the seven, when her mother is ordered to send Jeanette to school. As this young girl begins to age she realises that she sometimes disagrees with the teachings of her congregation-, which ultimately leads her to explore her sexuality- here, both the church and the protagonist herself question gender roles. 'The Color Purple' and 'Oranges Are Not the Only Fruit' portray males in the form of a father in a very negative way immediately. Infact, they are portrayed negatively on the first pages of both novels. "He start to choke me, saying You better shut up and git used to it. But I never git used to it." Immediately 'The Color Purple' opens with a painful sexual crime, where the man who the young protagonist calls her father, rapes her, this physical violence is Celie's first experience and introduction to sexuality. ...read more.

frail, they too have their weak points, to a point it can be interpreted in a view that men in reality are birds, trapped in masculine figures. Similarly, it is Harpo in 'The Color Purple' who is portrayed as the comical character, who cries in the arms of Celie, '...Cry like they mama just die. Harpo come to, shaking.' The image of a grown 'man' crying creates humour in the minds of the readers, as the representation of a 'male' living in a completely patriarchal dominated society is seen to be crying, to a 'woman'- who is viewed as second class, and a symbol for male pleasure. The name 'Harpo' itself also adds comedy to the gender, as 'Harpo' can be compared to a 'Harp' which releases gentle, warm and beautiful tones, which can be dominated by larger instruments, such as the marching of a drum, which can be portrayed through 'Sofia'- his wife. Walker had presented Harpo as being comical as she wants to overturn the stereotypical gender roles, which Harpo's actions portray. Harpo enjoys cooking and housework, kisses his children and marries an independent woman (Sofia). Readers get a sense of the 'twentieth century male' - which is completely 'normal' for this day and age- but not at the time the novel has been set. Walker has presented. The 'female' gender in, 'Oranges Are Not The Only Fruit,' is presented by Winterson to be the dominant force. This is clearly portrayed through the 'mother.' The mother takes over the 'male' responsibilities throughout the household, which include painting and DIY. Here, there is a complete role reversal between the father and the mother, who takes upon the male gender roles. She seems to be the dominant figure in the house, '...my mother liked to wrestle.' Winterson, immediately presents the 'women'- in this case the mother in a dominant position compared to the men, which is the father, who is almost put into a comical position with a discreet undertone of male mockery. ...read more.

Shug Avery refuses to allow herself to be dominated by males, unlike her own mother, who was oppressed by the traditional gender roles. As the role between Shug Avery and Celie develops. Shug fills the roles of mother, confidant, lover, sister, teacher, and friend. Shug Avery has been presented by Walker to be a great character, full of energy and excitement, who is unruly and independent, everything that Celie has wanted to be. Most of all, Shug is free, from men and the patriarchal society, in which she is trapped. Shug Avery's has been presented, by Walker to have the gender of both a man and a woman, as she freely explores her sexuality and does not allow anyone to hold her under oppression or captivity. Her character represents the role model and the freedom that Celie and many women like her long for at this time. Therefore it is Elsie and Shug Avery's strong beliefs that lead the protagonists to fight their own battles, mentally, as well as physically, which comes through the form of sexual exploration. To conclude with, I learnt that both the protagonists are attempting to free themselves form the traditional stereotypical roles set for them by the society in which they live. However, they can only do so, once they have crossed the obstacles set for them by certain members in society. I have also learn that the theme of sister-hood is important, as when women come together, they build each others confidence, such as in 'The Color Purple.' Also the male portrayal in both novels has been that of a negative one, men have been mocked upon and frown upon in both novels and consequently concluding with the fact that men are not important in society, which raises the question, whether both novels are feminist in their views. Role models play an important part in both novels, as they are the source of empowerment for the struggle of the protagonist. The social construction of gender roles plays an immensely major part in the lives of the protagonists in which they arise victorious through many difficult situations. ...read more.