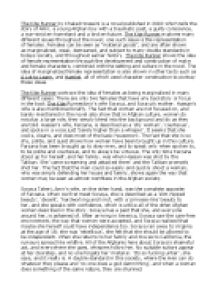 ﻿The Kite Runner by Khaled Hosseini is a novel published in 2003 which tells the story of Amir, a young Afghan boy with a traumatic past, a guilty conscience, a war-stricken homeland and a broken future. The Kite Runner explores many different issues throughout the novel; one such issue is the representation of females. Females can be seen as ?material goods?, and are often shown as marginalized, weak, demeaned, and subject to many double standards in todays society, and throughout earlier history. The Kite Runner shows the idea of female representation through the development and construction of make and female characters, combined with the setting and culture in the novel. The idea of marginalized female representation is also shown in other texts such as A Lot to Learn, and Hamlet, all of which used character construction to portray these ideas. The Kite Runner portrays the idea of females as being marginalized in many different cases. There are only two females that have any backstory or focus in the book The Kite RunnerAmir?s wife Soraya, and Soraya?s mother. Hassan?s wife is also mentioned briefly. ...read more.

To keep the state functioning as a whole, Gertrude realized she would need a new king to rule. Gertrude also may have realized how easy it would be for another man to take advantage; if they controlled Gertrude, they could control the state. Her marriage to Claudius at least guaranteed that the state was run by someone she trusted and could see as a ruler. None of these ideas were explicitly stated, because Gertrude was never really given a chance to defend herself and her actions, due to Hamlet being the focus of the story. ?Frailty, thy name is woman?, Hamlet says, referring to poor Gertrude. He refers to the way that Gertrude was moulded so quickly to another?s will, the way her confidence faltered so soon, and how weak Gertrude really was. Hamlet is a character that has no respect for women. He holds a grudge against his mother, and as the play progresses, these dark feelings that he feels towards his mother grow stronger. Hamlet starts to feel so strongly to his mother ?betraying? him, that he starts to apply this idea to all women, even weak Ophelia. ...read more.

Ned comes across a slight hitch, however, when he mutters the word ?girl?. In our society today, the word ?girl? often refers to woman, not literally a girl or child. Its a misconception, just a word in our culture that has developed to mean something else from the original meaning. Ned obviously does not want the small, innocent child that appears in the machine, as he curses ?Hell!?. Referring to a woman as ?girl? is almost demeaning in a way. The fact that Ned wishes for a girl as well is slightly disturbing. Upon reading it, most people would immediately assume that Ned wants this girl for nefarious purposes, to fulfil a fantasy or something of that drift. This is another symbol of the female representation being marginalized, shoved aside as the weaker gender. All of these different characters from these three stories easily show the idea of females being marginalized and disenfranchised. Characters such as Ned Quinn, Hamlet, and General Sahib are constructed to be dominant over the female characters. The settings and culture, when combined with these strong male characters, show the many double-standards that exist between females and males, and also show the idea of females being represented as trophy objects. ...read more.