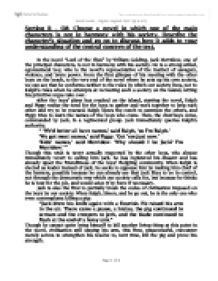 Section B - Q8: Choose a novel in which one of the main characters is not in harmony with his society. Describe the character's situation and go on to discuss how it adds to your understanding of the central concern of the text. In the novel "Lord of the Flies" by William Golding, Jack Merridew, one of the principal characters, is not in harmony with his society. He is a strong-willed, egomaniacal boy, who is the novel's representative of the instinct of savagery, violence, and brute power. From the first glimpse of his meeting with the other boys on the beach, to the very end of the novel where he sets up his own society, we can see that he conforms neither to the rules by which our society lives, nor to Ralph's rules when he attempts at recreating such a society on the island, letting his primitive urges take over. After the boys' plane has crashed on the island, starting the novel, Ralph and Piggy realise the need for the boys to gather and work together to help each other and try to be rescued. ...read more.

Indeed, next time the reader meets Jack, he feels no such inhibitions. Golding describes his feelings as he talks to Ralph: "He tried to convey the compulsion to track down and kill that was swallowing him up. 'I went on. I thought, by myself - ' The madness came into his eyes again. 'I thought I might kill.' " By using words such as 'madness', we see how far Jack has fallen: from being head choir boy, resplendent in his black robes, with an angelic voice, to being described as 'dog-like' in his savage quest, fuelled by blood-lust. Golding highlights this contrast between Jack and civilised society even further buy saying: "They walked along, two continents of experience and feeling, unable to communicate." Though Jack has indulged his primitive nature, Ralph has been busy trying to build shelter and maintain the signal fire, while most of the other boys have left and are having fun in the lagoon. Ralph has taken up the mantle of the leader of the island, and is trying to preserve society's ideals of looking after those weaker than yourself, never shirking his responsibility to the boys over whom he rules. ...read more.

Ralph goes over to try and reason with him, saying: " 'I'll blow the conch,' said Ralph breathlessly, 'and call an assembly.' 'We shan't hear it.' " Jack has thrown off the last vestiges of society, and is no longer willing to listen to Ralph's attempts to maintain democracy. He likes being in control of the boys, violence, and being able to hunt without interruption. After causing the deaths of Piggy and Simon, he coerces Samneric into joining his camp, and starts a manhunt for Ralph. Murder and bloodlust like this have (or, at least, should have) no place in our society, and through these extreme actions Golding emphasises his theme of "the darkness of man's heart' - for how dark must Jack's heart be to allow a boy of twelve or so to rule over a regime of terror and oppression? Word Count: 1038 15/25 - B- Better if: * More on Jack latterly in the novel, to highlight the disharmony more, with slightly less on the earlier chapters * A lot more direct reference to Golding's theme, an essential part of the rubric ?? ?? ?? ?? Sarah Leslie - Higher English 2007 Q8 (LotF) Page 1 of 3 ...read more.