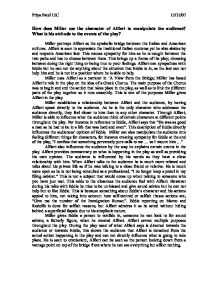 How does Miller use the character of Alfieri to manipulate the audience? What is his attitude to the events of the play?

How does Miller use the character of Alfieri to manipulate the audience? What is his attitude to the events of the play? Miller portrays Alfieri as the symbolic bridge between the Italian and American cultures. Alfieri is seen to appreciate the traditional Italian customs yet he also abides by and respects American law. This causes sympathy for him as he is caught between the two paths and has to choose between them. This brings up a theme of the play; choosing between doing the right thing or being true to your feelings. Alfieri can sympathise with Eddie but he can not do anything about the situation that Eddie is in, as the law can not help him and he is not in a position where he is able to help. Miller uses Alfieri as a narrator in 'A View from the Bridge; Miller has based Alfieri's role in the play on the idea of a Greek Chorus. The main purpose of the Chorus was to begin and end the action that takes place in the play, as well as to link the different parts of the play together so it runs smoothly. ...read more.

This is not a subject that would come up when talking to someone who you have just met. This adds to the closeness the audience feel with Alfieri. However during his talks with Eddie he tries to be un-biased and give sound advice but he can not help but to like Eddie. This is because something about Eddie's character and his actions appeal to him, not taking into account how self-centred or selfish theses actions are, "Give me the number of the Immigration Bureau". Eddie reporting on Marco and Rodolfo is done for selfish reasons, but Alfieri admires it as he acted without hiding behind a superficial fa�ade due to his simplistic nature. Miller gives Eddie a person to confide in, someone he can look to for sound advice; a fatherly figure, when he created Alfieri. Alfieri serves multiple purposes throughout the play. During the play most of what Alfieri says is directed towards the audience or towards Eddie, this shows the audience that Alfieri is detached from the actual action happening in the play and can not directly influence what is going to take place. ...read more.

The gist of the advice he gives them, is that the law can not help them in the situation they are in, and it is better to "let it go". The advice he gives them is what they should follow if they want to do the right thing, but it is not what each of them want to hear so they do not heed it. At the end of the play Miller, through Alfieri causes sympathy for Eddie and shows the audience Eddie's redeeming quality, his love for his family and being "himself purely" in his actions even if his actions are not purely good. Alfieri can not help but to be drawn to Eddie and this causes internal conflict within him because he is torn between being true to his roots or to abide by the laws of the country in which he resides in. Alfieri whilst being omniscient is also impotent; this is a major contributing factor to the tragic demise of Eddie and the tragic ending of the play. ?? ?? ?? ?? Priya Patel 12C 12/12/07 ...read more.