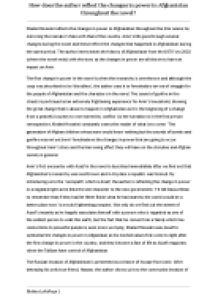 How does the author reflect the changes in power in Afghanistan throughout the novel &quot;The Kite Runner&quot;?

Khaled Hosseini uses Assef to symbolise the changes in power in Afganistan as his morbid values first come to light after the first change in power in the country, and they become a fact of life as Assef reappears when the Taliban have control of Afghanistan. The Russian invasion of Afghanistan is presented as a chance of escape from Amir. After betraying his only true friend, Hassan, the author shows us how the communist invasion of Afghanistan drives them to America. As America is a symbol for freedom, Amir and Baba?s migration is not simply an escape from the new power presiding in Afghanistan but for Amir it is an escape of the mind as he is running away from the tragic event that occurred in that alleyway. The change is power in Afghanistan is reflected by the author in the impact it has had on their lives. Although they have escaped the Soviets, and Amir has escaped his past, they?re lives a far cry from the wealth and luxury they enjoyed in Afghanistan. ...read more.

Finally, the novel ends shortly after the Twin Tower attacks and the American and allied forces invasion of Afghanistan. Although Amir?s viewpoint of this new change in power is optimistic, ?Soon after the attacks, America bombed Afghanistan, the Northern Alliance moved in, and the Taliban scurried like rats into the caves?, the use of the word bomb highlights the fact that the conflict has still not ended and the author is suggesting that the period of transitioning for America to install themselves as the new power in Afghanistan will cause further damage to the country and its people. In conclusion, the author shows reflects the changes in power in Afghanistan throughout the novel by merging Amir?s experiences with that of what the country experienced as a whole. Every change in power had an important effect on Amir?s life and the author uses his feelings to show us how a peaceful country ended up into a period of conflict which still hasn?t finished. Although the story ends well for Amir, his quest for redemption completed, Afghanistan is shown to still be going through tough times due to the conflicts over who is in power and the objectives and actions of those in power in Afghanistan. ________________ Shahan LakePage ...read more.