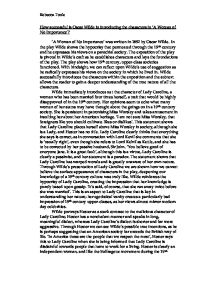 How successful is Oscar Wilde in introducing the characters in 'A Woman of No Importance'? 'A Woman of No Importance' was written in 1892 by Oscar Wilde. In the play Wilde shows the hypocrisy that permeated through the 19th century and he expresses his views on a parochial society. The exposition of the play is pivotal in Wilde's craft as he establishes characters and lays the foundations of the play. The play shows how 19th century, upper-class societies functioned. With hindsight, we can reflect upon Wilde's use of suggestion as he radically expresses his views on the society in which he lived in. Wilde successfully introduces the characters within the exposition and the subtext allows the reader to gain a deeper understanding of the true nature of all the characters. Wilde immediately introduces us t the character of Lady Caroline, a woman who has been married four times herself, a trait that would be highly disapproved of in the 19th century. Her opinions seem to echo what many women of her status may have thought about the goings on in a 19th century society. ...read more.

'In America those are the people that we respect the most', Hester says this to Lady Caroline when she is being informed that Lady Caroline is disdainful towards people that have to work for a living. Hester is clearly an independent woman, and like the Suffragette movement during the 19th century, she represents the 'new woman'; she is very clear about what she wants and is able to make her own decisions. In the 19th century the Suffragettes battled for the rights for women to vote and were very forward in their thinking, much in the same way as Wilde and Orwell (1984). When Hester comments on her thoughts and feelings towards Gerald Arbuthnot many of the characters disapprove of her speech, as she is breaking the stereotypical expectations of a woman in the 19th century. 'He has one of the most beautiful natures I have ever come across'. Although Hester is the most isolated and vulnerable, due to her being from America, the audience seem to her like her the most out of all the characters, as she appears to be the most honest and likeable, she also has a witty sense of humour. ...read more.

Illingworth regards women as merely a 'toy' and thinks that 'women have become too brilliant'. Lord Illingworth is very similar to Lord Henry from 'The Picture of Dorian Gray', who constantly speaks in epigrams and aphorisms. Illingworth makes a biting comment, 'it is the problem of slavery'. This epigram shows the naivety that filled the world of the upper-classes during the 19th century and it shows how people of such high social class could call such a pressing issue, a 'problem'. 'Lords are never in touch with public opinion. That makes us a civilised body'. This comment is a blunt summary of how Lord Illingworth views the English society - uncivilised and not worthy of mixing with the higher classes. As through the exposition many characters are being introduced, including Lady Allonby, Gerald Arbuthnot and Lady Hunstanton, the subtext allows the reader to gain a deeper understanding of the true nature of the characters. The play shows the audience the fa�ade that upper-classes, during the 19th century, had to endure to meet with social expectations. Therefore Wilde is successful in introducing the characters within the first act and the reader can deduce Wilde's deeper meaning and distress towards the society in which he had to live in. ?? ?? ?? ?? Rebecca Toole ...read more.