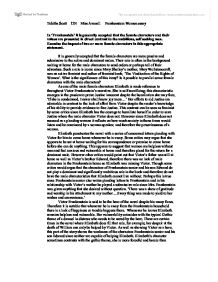 In Frankenstein(TM) it is generally accepted that the female characters and their values are presented in direct contrast to the ambitious, self seeking men. Examine the impact of two or more female characters in this appropriate sta

In 'Frankenstein' it is generally accepted that the female characters and their values are presented in direct contrast to the ambitious, self seeking men. Examine the impact of two or more female characters in this appropriate statement. It is generally accepted that the female characters are more passive and submissive to the active and dominant males. Their role is often in the background waiting at home for the male characters to send orders or perhaps tell of their adventure. Such a role is ironic since Mary Shelley's mother, Mary Wollstonecraft, was an active feminist and author of feminist book, 'The Vindication of the Rights of Women'. What is the significance of this irony? Is it possible to parallel some female characters with the male characters? As one of the main female characters Elizabeth is made reference to throughout Victor Frankenstein's narrative. She is self-sacrificing; this characteristic emerges in the passion to prove Justine innocent despite the humiliation she may face, 'If she is condemned, I never shall know joy more...' Her efforts to aid Justine are admirable in contrast to the lack of effort from Victor despite the reader's knowledge of his ability to provide evidence to free Justine. ...read more.

She is murdered by the monster as an innocent. As well as highlighting the victims in the story, her death also reflects the true evil of the monster and his spitefulness. Victor destroyed his companion and so he destroys Elizabeth so soon after their wedding. Victor is responsible for another loved one's death where he could have put an end to it before just by alerting people of the monsters presence at the time of Justine's trial. Justine Moritz was accused of the death of young William Frankenstein. The reader is inclined to question the facts as we hear that the necklace was found on Justine. This causes suspicion since we believe that a monster would not be intelligent enough to frame someone else to hide his own crime. At this point in the story we have not met the monster and are therefore unaware of his intelligence. To begin with Justine righteously denies all allegations but unfortunately cannot account for her activities at the believed hour of William's death. Whilst the reader desperately wants to believe Justine and follow Elizabeth's conviction, it is near impossible not to suspect Justine. At the beginning of the trial process Justine denies being any part of the murder. ...read more.

Mary Shelley was raised by her father who imposed his beliefs on radicalism and the perfectibility of men, it is natural that some of his influence and the influence of society would appear in the novel. Her mother was a feminist but died eleven days after the birth of Mary Shelley and so could not have imposed her views on her child. Though it could be argued that feminine themes are present in the novel, for example Victor's flawed character is balanced with the presence of Elizabeth, and also Elizabeth's active role in Justine's trial. To conclude, Mary Shelley has drawn parallels and provided contrasts between the male and female characteristics in a way that is inconclusive. This could have been the main reason for her novel's success since it doesn't strongly lean to either side of the equality debate that began in the 19th century and continued into the 20th and to some extent 21st century. Perhaps a focus on men and women is not what she intends to have as a focal point in the novel. Instead her point is that damages of science, but the equality of men and women makes an interesting sub-theme in the plot of 'Frankenstein.' ?? ?? ?? ?? Tabitha Scott 12N Miss Avanall Frankenstein Women essay ...read more.