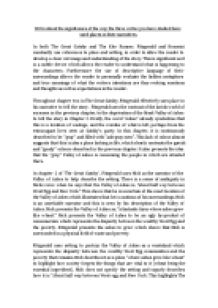 In both The Great Gatsby and The Kite Runner, Fitzgerald and Hosseini constantly use references to place and setting, in order to allow the reader to develop a clear cut image and understanding of the story.

﻿Write about the significance of the way the three writes you have studied have used places in their narratives. In both The Great Gatsby and The Kite Runner, Fitzgerald and Hosseini constantly use references to place and setting, in order to allow the reader to develop a clear cut image and understanding of the story. This is significant as it is a subtle device which allows the reader to understand what is happening to the characters. Furthermore the use of descriptive language of their surroundings allows the reader to personally evaluate the hidden metaphors and true meanings of what the writers intentions are thus evoking emotions and thoughts as well as expectations in the reader. Throughout chapter two in The Great Gatsby, Fitzgerald effectively uses place in his narrative to tell the story. Fitzgerald uses the contrast of the lavish world of excesses in the previous chapter, to the deprivation of the bleak Valley of Ashes to tell the story in Chapter 2. Firstly, the word "Ashes" already symbolizes that this is a location of wastage, and the residue of what is left, perhaps from the extravagant lives seen at Gatsby's party. ...read more.

The setting of the Valley of Ashes is striking because Fitzgerald describes it as being 'half way between West Egg and New York'. The valley is located in between the physical separation of these two important settings, 'West egg' and 'New York'. This unclassifiable space in which the Valley of Ashes inhabits amplifies how society has discluded and even outcasted the 'desolate area of land'. Furthermore the fact that the area is physically bound by the shoulders of a valley foregrounds how the Valley of Ashes is blockaded from other worlds especially that of Gatsby's. The people of the Valley of Ashes embody landscape of 'gray land'. Fitzgerald describes the inhabitants as 'ash grey men' metaphorically presenting them as the powdery residue left after the burning of a substance therefore camouflaging the people into the scene. The monochromatic colours of 'grey' emphasise how the people have been drained of colour therefore lacking energy and life. Fitzgerald highlights the delapedation of the Valley of Ashes within his reference to the personal views of the narrator. It is fair to say that the reader knows Nick Carraway to be a biased narrator as he often exaggerates the truth. ...read more.

The chapter ends with Amir entering Baba's study, moving toward his father's arms full body embrace. The final lines are "In his arms, I forgot what I'd done. And that was good." Chapter 7 is a pivotal chapter in "The Kite Runner" as the harrowing rape incident shapes the rest of the novel and it is this chapter where Amir's journey to redemption begins. Hosseini tells the story in chapter 7 by developing major themes that are evident throughout the novel. The symbolism of the kites, the state of Afghanistan, friendship, sin, dreams, violence and betrayal are all interwoven by Hosseini in this chapter in order to portray the incident in the most emotionally effective way possible. During chapter 7 Hosseini presents time as a slow moving matter when Amir goes to search for Hassan compared to the rest of the chapter, during the kite fight, this helps create tension and suspense for the reader. This is achieved by Hosseini through a sequence of memories and dreams, ?did you know that Hassan and you fed from the same breast?? shows that while Amir is telling the event, he?s tried to present himself with the happier memories of his childhood with Hassan, these memories and dreams he has help Hosseini prolong the chapter and keep time moving slow enough to build tension for the reader. ...read more.