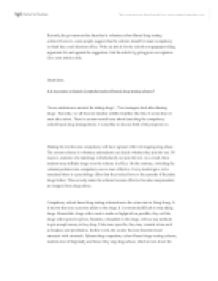 Is it necessary to launch a compulsory school-based drug-testing scheme?

Recently,the government has launched a voluntary school-based drug-testing scheme.However, some people suggest that the scheme should be made compulsory so thatit has a real deterrent effect. Write an article for the school newspaperproviding arguments for and against the suggestion. End the article by givingyour own opinion. Give your article a title. DearEditor, Is it necessary to launch Compulsoryschool-based drug-testing scheme? 'Seven students are arrested for taking drugs.','Two teenagers died after abusing drugs.' Recently, we all become familiar withthe headline like this. It seems that we must take action. There is acontroversial issue about launching the compulsory school-based drug-testingscheme. I would like to discuss both of the perspectives. Making the test become compulsory will have agreater effect of stopping drug abuse. ...read more.

Compulsory school-based drug-testing schemelowers the crime rate in Hong Kong. It is known that once a person addict to the drugs, it is extremelydifficult to stop taking drugs. Meanwhile, drugs seller want to make as highprofit as possible, they sell the drugs with expensive prices, Students, whoaddict to the drugs, will use any methods to get enough money to buy drug, Tobe more specific, they may commit crime such as burglary and prostitution, Inother word, the society become disordered and saturated with criminals. Bylaunching compulsory school-based drugs-testing scheme, students tear of thepenalty and hence they stop drugs abuse, which in turn lower the teenager crimerate in Hong Kong. Nevertheless there are disadvantages whenlaunching the compulsory drugs test. ...read more.

Unfortunately, students may thinkthat they probably not be chosen. Thus the effect of the test is weakened. In my point of view, there is no denyingthat compulsory school-based drug-testing scheme is effective, but usingalternative ways at the same time can improve the situation more efficiently.Enhancing drugs education is a suggestion for government. Students should beeducated more seriously about the drawbacks of drugs abuse such as how thedrugs contaminate their organs especially their brains. These can arouse theirawareness on the disadvantages of drugs abuse. On the other hand, parents arerecommended to pay more time with their children. Love is essential for allteenagers. As they have great stress on them about study, more care can helpthem refuse to take drugs. Nothing but only the corporation between governmentand parents can solve the problem. ?? ?? ?? ?? ...read more.