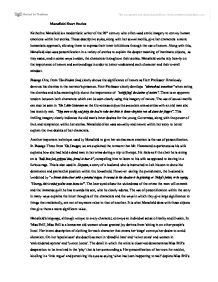 Mansfield Short Stories Katherine Mansfield is a modernistic writer of the 20th century who often used erotic imagery to convey human emotions within her stories. These descriptive styles, along with her sexual motifs, give her characters a more humanistic approach, allowing them to express their inner inhibitions through the use of nature. Along with this, Mansfield also uses personification in a variety of stories to explain the deeper meaning of inanimate objects, as they assist, and in some ways burden, the characters throughout their stories. Mansfield works rely heavily on the importance of nature and surroundings in order to better understand each character and their overall mindset. Passage One, from The Modern Soul, clearly shows the significance of nature as Herr Professor flirtatiously devours his cherries in the narrator's presence. Herr Professor clearly develops "etherealised sensations" when eating the cherries and talks meaningfully about the importance of "satisfy[ing] the desires of nature". There is an apparent tension between both characters which can be seen clearly using this imagery of nature. ...read more.

However during the punishment, the husband is burdened by "a brown china bear with a painted tongue. It seemed in the shadow to be grinning at Dicky's father, to be saying, "Hooray, this is what you've come home to!". The bear symbolises the wickedness of the crime the man will commit and the immense guilt he has towards his son, who he clearly adores. The use of personification within the story in many ways explains the inner thoughts of the characters and the ways in which they give large significance to things that realistically, are not of anymore value to that of another. It is what Mansfield does with these objects that give them a more significant value. Mansfield's language, although unique to every character, conveys an individual sense of reality and illusion. In 'Miss Brill', Miss Brill is a lonesome old woman whose greatest joy derives from 'sitting in on other people's lives'. Her intent description of clothing for each character that enters her 'stage' conveys her desire to avoid alienation. ...read more.

Miss Brill notices the shabby 'knocked' nature of the fur but fails to recognise that the aged, 'sad' appearance of her 'friend' is a reflection of her life's own disappointment. Much like the fur in the box, Miss Brill too lives in isolation in her 'dark...cupboard-like' house. The true illustration of her loneliness occurs at the end of the story when she imagines 'something crying'. She perceives that this emotion is coming from the fur, unable to acknowledge that it is she who is isolated. Katherine Mansfield's uses a variety of ideas and concepts within her short stories to better accentuate the importance of nature within life and the dramas within the plot. Her sexual motifs (the cherries, strawberries, pear trees) are all perfect examples of the inner desires of each character and can, in many ways, be reflective of her life and her own sexual ambiguity. The many examples of personification also help influence our attitudes towards each of the characters and the impacts of the things that surround them. Mansfield ability to give life to inanimate objects does help better our perception of her characters and does show help give Mansfield a personalised style that distinguishes her from writers of her generation. ...read more.