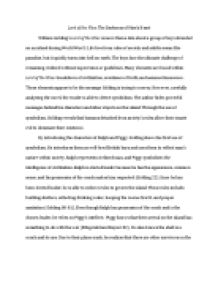 Lord of the Flies: The Darkness of Man's Heart

﻿Lord of the Flies: The Darkness of Man?s Heart William Golding?s Lord of the Flies is more than a tale about a group of boys stranded on an island during World War II. Life free from rules of society and adults seems like paradise, but it quickly turns into hell on earth. The boys face the ultimate challenge of remaining civilized without supervision or guidelines. Many elements are found within Lord of the Flies: breakdown of civilization, avoidance of truth, and assumed innocence. These elements appear to be the message Golding is trying to convey. However, carefully analyzing the novel, the reader is able to detect symbolism. The author hides powerful messages behind his characters and other objects on the island. Through the use of symbolism, Golding reveals that humans detached from society?s rules allow their innate evil to dominate their existence. By introducing the characters of Ralph and Piggy, Golding shows his first use of symbolism. He introduces them as well-bred British boys and uses them to reflect man?s nature within society. Ralph represents civilized man, and Piggy symbolizes the intelligence of civilization. Ralph is elected leader because he has the appearance, common sense, and his possession of the conch makes him respected (Golding 22). Since he has been elected leader, he is able to enforce rules to govern the island. These rules include: building shelters, collecting drinking water, keeping the rescue fire lit, and proper sanitation (Golding 80-81). ...read more.

Jack?s leadership allows his followers to become hunters and to accept their savagery as well (Kinkead-Weekes and Gregor 28). Golding uses Ralph and the contrast of Roger?s character and to portray the emergence of his beast and the affect Jack has on his followers. Before giving in to his beast, Roger under the rules of civilization is able to throw stones at Henry intentionally missing ?here invisible yet strong, was the taboo of the old life (Golding 62).? Roger intentionally misses because he knows his beast his beast is trying to direct his actions. He is only able to deter the impulse of actually hitting Henry by trying to remember what is considered right and wrong actions in society. Instead of granting his beast full control, he tempts it. Golding describes the moment Roger completely yields to his beast. It was during the reenactment of the pig hunt, which was Ralph?s first hunt. Jack and his hunters circle around the pig, Robert, and begin to poke him with sticks. The innocent reenactment becomes violent; Robert?s screams of pain go unnoticed because their beasts overcome all of the boys. Roger is fighting to get closer, and Ralph is fighting to get near, to get a handful of flesh, the desire to squeeze and hurt was mastering (Kinkead-Weekes and Gregor 50). Roger submits to his beast, and Ralph awakens his beast that he has been trying to suppress. ...read more.

The island is described like the Garden of Eden: bright sun, lagoon, sweet air, and ripe fruits (Dickson 13; Kinkead-Weekes and Gregor). It appears to be an earthly paradise (Page 118). The boys are like Adam and Eve living in the Garden of Eden with the ability to sin (Dicken-Fuller 16). The corruption of the island begins with the creepers. Creepers appear to snakes at night. Then eating too many fruits results with the schoolboys having diarrhea. Critics argue that literally eating too many fruits has this outcome, but it could represent that the boys? sinful bodies are no longer fit for the island, Garden of Eden (Dickson 20). During the hunting of Ralph, the island is set on fire. The island went from an earthly paradise to a burning hell (Dickson 13). Another symbolic meaning of the island?s burning would be that its beauty is degraded by the boys? presence (Page 118). In conclusion, being stranded on an island with no rules or supervision is initially viewed as an earthly paradise. Numerous ideas like the breaking down of society, ignoring the truth, and assuming the truth. In contrast, if one carefully dissects the novel, the use of symbolism is clearly present. Golding uses his characters and additional articles on the island to demonstrate that man is inherently immoral. Man?s immorality is concealed by the rules governing society. Once man is liberated from rules, he will eventually allow his dark desires to dominate his being. ...read more.