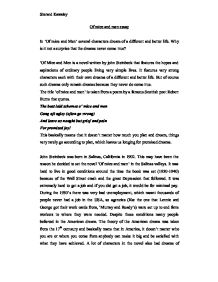 Of mice and men essay In 'Of mice and Men' several characters dream of a different and better life. Why is it not a surprise that the dreams never come true? 'Of Mice and Men is a novel written by john Steinbeck that features the hopes and aspirations of ordinary people living very simple lives. It features very strong characters each with their own dreams of a different and better life. But of course such dreams only remain dreams because they never do come true. The title 'of mice and men' is taken from a poem by a famous Scottish poet Robert Burns that quotes. The beat laid schemes o' mice and men Gang aft agley (often go wrong) And leave us nought but grief and pain For promised joy! This basically means that it doesn't matter how much you plan and dream, things very rarely go according to plan, which leaves us longing for promised dreams. ...read more.

The conversation about the dream started off when Lennie said to George " tell me- like you done before about the rabbits." The dream was basically that they wanted their own land where nobody can boss them around and tell them what to do. They also wanted to raise animals such as pig's cows and chickens " an live of the fatta da lan". From this dream the to characters Lennie and George both wanted different things. George wanted a place of his own and independence he also wanted security for Lennie but the main thing he wanted is a ranch like the one he lived on as a child. On the other hand the only thing Lennie wants from the dream is to "tend the rabbits". At this point of the novel the dream that Lennie and George had was still just a fantasy not reality. This is because George and Lennie did not have much money, like many people who lived around the time of the great Depression. ...read more.

Then Curleys' wife walks in and has an argument with the three men and threatens crooks by saying se could heave him hung, it is after Curleys wife leaves the bunkhouse that crooks decides to withdraw his offer and end his dream. Curley's wife dream is different from all the other means dreams. When she was younger, a man said that he was a film producer and that when he went he would come back for her and she would be in the movie. She waited for long for the man to send for her but he never did, she thought it her mother hid the letters but I think the man was not a real director; he was just flirting with her. Curley's wife manages to end all of the dreams she firstly ends crooks dream by telling him that she could get him hung, then she ends everyone else's dream when she dies because Lennie killed her and George then knows their dreams are over and her dream is over because she dies. Sherard Kawaley ...read more.