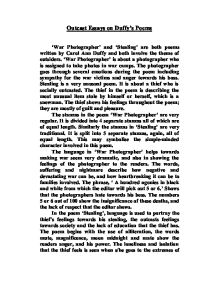 Outcast Essays on Duffy's Poems 'War Photographer' and 'Stealing' are both poems written by Carol Ann Duffy and both involve the theme of outsiders. 'War Photographer' is about a photographer who is assigned to take photos in war camps. The photographer goes through several emotions during the poem including sympathy for the war victims and anger towards his boss. Stealing is a very unusual poem. It is about a thief who is socially outcasted. The thief in the poem is describing the most unusual item stole by himself or herself, which is a snowman. The thief shows his feelings throughout the poem; they are mostly of guilt and pleasure. The stanzas in the poem 'War Photographer' are very regular. ...read more.

The phrase, ' A hundred agonies in black and white from which the editor will pick out 5 or 6.' Shows that the photographers hate towards his boss. The numbers 5 or 6 out of 100 show the insignificance of these deaths, and the lack of respect that the editor shows. In the poem 'Stealing', language is used to portray the thief's feelings towards his stealing, the outcasts feelings towards society and the lack of education that the thief has. The poem begins with the use of alliteration, the words mute, magnificence, moon midnight and mate show the readers anger, and his power. The loneliness and isolation that the thief feels is seen when s/he goes to the extremes of staling a snowman for company. ...read more.

The poet tries to make you feel sorry for the thief and feel grateful for having someone. Again in the poem 'War Photographer' the poet is trying to make the audience feel empathetic towards the photographer and realise the devastating scenarios he has to take photos of. War isn't seen to be real to the readers of the magazine but the photographer see the real heartache upfront and the pain and anguish on the faces of the soldiers. Both poems are very similar. They both involve the theme of outcasts. The outcasts each has there own personal views on society and their behaviour reflects this. The thief satisfies his needs by stealing goods, and preventing other people enjoying them just as the thief never experienced love and happiness in the past. The photographer shows his anger not by actions but by strong emotive words. ...read more.