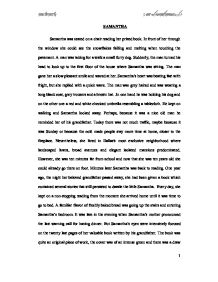 Samantha was seated on a chair reading her prized book.

SAMANTHA Samantha was seated on a chair reading her prized book. In front of her through the window she could see the snowflakes falling and melting when touching the pavement. A man was taking for a walk a small furry dog. Suddenly, the man turned his head to look up to the first floor of the house where Samantha was sitting. The man gave her a slow pleasant smile and waved at her. Samantha's heart was beating fast with fright, but she replied with a quick wave. The man was grey haired and was wearing a long black coat, grey trousers and a brown hat. .In one hand he was holding his dog and on the other one a red and white checked umbrella resembling a tablecloth. He kept on walking and Samantha looked away. Perhaps, because it was a nice old man he reminded her of his grandfather. Today there was not much traffic, maybe because it was Sunday or because the cold made people stay more time at home, closer to the fireplace. Nevertheless, she lived in Dallas's most exclusive neighborhood where landscaped lawns, broad avenues and elegant isolated mansions predominated. However, she was ten minutes far from school and now that she was ten years old she could already go there on foot. Minutes later Samantha was back to reading. One year ago, the night her beloved grandfather passed away, she had been given a book which contained several stories that still persisted to dazzle the little Samantha. Every day, she kept on a non-stopping reading from the moment she arrived home until it was time to go to bed. A familiar flavor of freshly baked bread was going up the stairs and entering Samantha's bedroom. It was late in the evening when Samantha's mother pronounced the last warning call for having dinner. But Samantha's eyes were intensively focused on the twenty last pages of her valuable book written by his grandfather. ...read more.

Samantha was surprised to see her mother doing something for her. She could not believe that she was being nice. Since Samantha's father decision of going to war made her mum to close herself to a Barbie lifestyle. In addition, she did not pay much attention to Samantha's pain while suffering from, first, her father and later his grandfather's absence. The former gave her moments of great charm but the latter had been the person who had substituted her father when he decided to go to war. He was really a nice man to her and always took care of the little Samantha. They both went everywhere together and he was a good company for her. Mrs. Perry took the keys of the car and drove back to school, no signal of the book. They asked Joseph, who was always the last person the leave from school, but he had not seen anything. Samantha paused to wipe the tears away that were beginning to fall down her cheeks. "Are you okay?" Mike asked looking up at her and seeing the sadness in his eyes. "It's OK " she answered. Mrs. Perry, noticing how red and swollen her pale blue eyes were, gave her a paper handkerchief. "Thanks mum" whispered Samantha. Next morning Mrs. Perry took her children to school. Once there Tom approached her with preoccupation. Samantha told him in tears what had happened the previous evening. "You just gonna sit here and wallow in self-pity?" "I keep blaming myself", said Samantha through her tears. "Listen, we will look for it until we find it, ok? I won't stop until you get your book. I promise". "Thanks, Tom. I owe you one." "Don't worry, you'll have to pay up one day," he joked smiling at her. In that precise moment a new voice startled her. "Hey Samantha, do you remember me? I'm your grandfather's best friend". ...read more.

"Oops, sorry Madam". The woman closed the book and Samantha could devise the picture of that girl picnicking. Her heart was beating strongly. Her hands were shaking and no words could come out her mouth. "I, I, sorry, can I have a look at your book?" "Of course, it's fantastic, my sister gave it to me when she died, and she told me that she bought it in Canada". There's a very nice dedication to a girl called Samantha. Samantha blinked twice. "I'm Samantha". The two women spent part of the travel talking about the book and exchanging opinions. Samantha explained the story from the beginning until the end and finally the old woman gave the book to) her. She could not believe that she had found the book, the search had finished and her treasured book was back to her. The 10 hours travel had vanished and it was time to meet Tom. She was waiting for her luggage at the conveyor belt. She could not believe it, her bag was always the last one to come out. She felt nervous and strange at the same time. This travel had brought her an unexpected surprise and now she would see Tom, that young boy she was most fond of. The front door opened and Samantha went trough it, she did not know where to look so she waited for him next to a corner out of the crowd. After 15 minutes she took the mobile to phone Tom, he should be there but they could not see each other. Someone touched her back, she turned her head and there was Tom. They both hugged: "I found it Tom, I found it!" "What?" "My grandfather's book, a woman on the plane was reading it, I told her the story and she gave it to me." Tom looked her in the eyes and kissed her. Samantha's tears were falling down her cheeks. Theme: If you move heaven and earth to obtain what you most desire you will finally achieve it. ?? ?? ?? ?? Short Story Silvia P�lach Roca 1 ...read more.