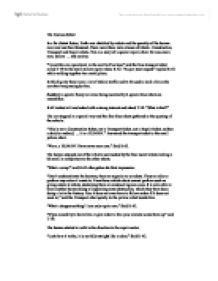 The Curious Robot In a far distant future, Earth was inhabited by robots and the quantity of the human race was less than thousand. There were three main classes of robots - Construction, Transport and Repair robots. This is a story of a special repair robot. He was small, new, yellow ... and curious. "I want this car operational in the next half an hour" said the blue transport robot called T-59 to the small yellow repair robot, R-62. "As per your request" replied R-62 while welding together two metal plates. In this big city there were a lot of vehicle traffic and R-62 used to look a bit on the cars that was passing by him. Suddenly a special fancy car came being escorted by 4 special blue robots on motorbikes. R-62 looked at it and asked with a strong interest and asked T-59: "What is that?" The car stopped in a special way and the four blue robots gathered to the opening of the vehicle. ...read more.

Meanwhile T-59 whispered to R-62 that actually humans has often accidents, cannot be repaired when gets broken, can make fatal mistakes, their construction breaks after 100 years, is only operational half of the day, its memory banks are of very low capacity, its machinery has no real physical force, has no radio communication, are not able to perform routine actions for a number of years, needs to learn things which takes years and is thus more than 100 times ineffective in their operations than robots. Then suddenly, immediately after the questions from the human were answered, R-62 said loudly: "I have some questions for you human." The human said, "Yes ..." a bit annoyed for not getting the mandatory "sir". "Every robot is constructed, programmed and exists for a specific basic purpose. For which purpose do you exist?" asked R-62. Silence followed the only question asked to the human since years and he then said: "I don't need to answer questions from robots!" ...read more.

"So stupid. The solution would be to take away the robots or at least make them stop doing the work which humans are supposed to do so that the humans get the necessity to expand and get more in number and not die out." Said R-62. "Yes, we actually all know this already except you who are a new design. The thing is that it is part of the illegal actions, which only the humans are able to do. And the last 1000 years they haven't done it. " Said T-59. "The humans are real stupid." Said R-62 "Yes but we can do nothing about it and have to follow the orders - cannot say against - and now we have to finish to repair this car." "All right, lets continue." After some hours the curious robot thought that it would still be much better without these dangerous stupid humans. Perhaps this was in the mind of every existing robot the last 1000 years but to voice something like that would definitely blow up the circuits. - The End - ...read more.