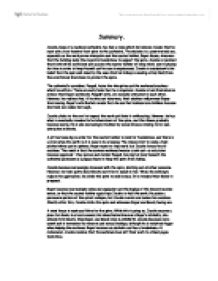 Summary of The Spire

Summary. Jocelin, Dean of a medieval cathedral, has had a vision which he believes reveals that he must add a four hundred foot spire to the cathedral. The decision is a controversial one, especially as the work proves disruptive and the master builder, Roger Mason, discovers that the building lacks the requisite foundations to support the spire. Jocelin is insistent that faith will be sufficient and accuses the master builder of being timid, and of playing for time in order to keep himself and his men in employment. Jocelin is maintained in his belief that the spire will stand by the news that his bishop is sending a Holy Nail (from the crucifixion) from Rome to protect the spire. The cathedral's caretaker, Pangall, hates the disruption and the workmen's mockery which he suffers. There are early hints that he is impotent. Jocelin is horrified when he notices that Roger and Goody, Pangall's wife, are sexually attracted to each other. However, he realises that, if he does not intervene, their adultery will prevent Roger from leaving. ...read more.

Jocelin becomes more unwell and is tormented by remorse and sexual feelings, although he is relatively happy when helping the workmen. Roger becomes an alcoholic and has a breakdown. At midsummer, Jocelin realises that the workmen have left their work to attend pagan festivities. The spire nears completion as the Holy Nail approaches. Jehan, Roger's second-in-command, now in charge of the work, miscalculates and damages the spire. An official from Rome, referred to only as the Visitor, interviews Jocelin and relieves him of his authority. In a raging storm, Jocelin climbs the spire and hammers the Nail in place, after which he has two mystical visions of Goody. Jocelin's aunt, Lady Alison, visits him and reveals that he was only appointed Dean thanks to her. The dumb sculptor, Gilbert, shows Jocelin that the pillars supporting the cathedral roof are not solid but filled with rubble. Father Adam reads aloud Jocelin's sermon describing his original vision of the spire. The process of Jocelin's disillusionment continues when Anselm - Jocelin's former teacher but now his junior as the Sacrist of the cathedral - denies that they were ever really friends. ...read more.

As the spire reaches upwards the Dean feels its weight upon his back until he ends bent double; though he isn't aware of it, Jocelin suffers a crippling spinal disease - tuberculosis of the spine - which eventually kills him. Throughout the building of the spire he believes that the early physical manifestations of his condition are the visitations of his own guardian angel. The novel is also concerned with sexuality. It is about two men's desire for a simple woman who remains unaware of her own attractions; one, the Dean, suppresses his desires and suffers because of it, the other, Roger Mason, fulfils his desires, gets her pregnant and also suffers by it. Goody Pangall dies in childbirth; her husband is bullied mercilessly by Roger's men and finally driven cruelly to his death; Roger tries to kill himself and ends his day in madness; Rachel is left desolate, tending to her husband as if he were the baby they never had; Jocelin dies in both physical and spiritual agony. Finally the spire is left, a symbol but a very ambiguous one. Of the power of God to work miracles? Of a bargain with the devil? Or of the skill and endurance of man? Golding doesn't tell us. ...read more.