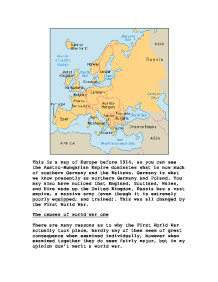 The causes of world war one

This is a map of Europe before 1914, as you can see the Austro-Hungarian Empire dominates what is now much of southern Germany and the Balkans. Germany is what we know presently as northern Germany and Poland. You may also have noticed that England, Scotland, Wales, and Eire made up the United Kingdom. Russia has a vast empire, a massive army (even though it is extremely poorly equipped, and trained). This was all changed by the First World War. The causes of world war one There are many reasons as to why the First World War actually took place, hardly any of them seem of great consequence when examined individually, however when examined together they do seem fairly major, but in my opinion don't merit a world war. Germany and France had a great rivalry after the wars of 1871 in which France lost the colonies of Alsange and Coraing to Prussia. France and it's people bitterly wand to have their revenge over Germany. Great Britain and Germany were also engaged in a hostile race to have the larger navy. This was heightened when Britain released a fleet of dreadnaughts which were the most lethal ships of warfare that the world had ever seen. The five major powers Great Britain At the start of the twentieth century Great Britain had the richest and largest empire in the world. Britain had the most trade and the largest navy on the planet. This had all happened under the leadership of queen Victoria (1837-1901). Germany Less than 50 years before the start of world war one Germany was not in existence, it was split up into smaller states. One of these states (Prussia), was larger then the rest, and wanted to unite with the other states to gain more power. This felt threatening to France and Austria, so they declare war on Prussia, they lost and the German empire was formed. ...read more.

Gas Poisonous gases had been around for a long time before the First World War, but military officers were reluctant to use them as they considered it to be an uncivilized weapon. The French Army, however were the first to employ it as a weapon, when in the first month of the war they fired tear-gas grenades into the German trenches. In October 1914 the German Army began firing shrapnel shells in which the steel balls had been treated with a chemical irritant. The Germans first used chlorine gas cylinders in April 1915 when it was employed against the French Army at Ypres. Chlorine gas destroyed the respiratory organs of its victims and this led to a slow death by asphyxiation. The weather was an important factor in the decision-making before a gas attack was made, so incidents like the following could be avoided. On the 25th September 1915, the wind blew it back into the faces of the advancing troops. This problem was solved in 1916 when gas shells were produced for use with heavy artillery. This increased the army's range of attack and helped to protect their own troops when weather conditions were not completely ideal. After the first German chlorine gas attacks, Allied troops were supplied with masks of cotton pads that had been soaked in urine. It was found that the ammonia in the pad neutralized the poison. One disadvantage for the side that launched chlorine gas attacks was that it made the victim cough and therefore limited his intake of the poison. It has been estimated that the Germans used 68,000 tons of gas against Allied soldiers. This was more than the French Army (36,000) and the British Army (25,000). An estimated 91,198 soldiers died as a result of poison gas attacks and another 1.2 million were hospitalised. The Russian Army, with 56,000 deaths, suffered more than any other armed force, as demonstrated below. ...read more.

The final attack After the withdrawal of Russia from the war, Germany could now concentrate all of it's resources onto the western front. The German "plan of action" was to make one final advance upon the allied trenches. The attack was primarily very effective and it looked as if ludendorff's gamble had been successful. The German troops were rapidly regaining ground and it looked bad for allied forces. However, the German troops were rapidly becoming exhausted and the supplies were not reaching the soldiers. The allies chose their time to counter-attack wisely and easily toppled their German opposition. The counter-attack begun on the 8th of August, the Allies took advantage of the fact that they had many more tanks than the Germans, and pushed back against the advancing Germans and broke through the Hindenburg line. In the final months of the war the Germans suffered heavy casualties. The effects of four years of fighting were felt heavily in German cities. They called for an end to the war which was fast becoming an inevitability. On 11th November at the 11th hour an armistice was signed by the allies and the Germans. The war was finally over. Consequences of the war The first world war had accounted for the death of over thirteen million people. This means that four had been killed and nine others wounded for every minute of fighting. If the money used to fund the war had been allocated differently, then every household in: The United States, Canada, Australia, Great Britain, France, Belgium, Germany, and Russia; with a house worth �500, furnished to the extent of �300, and given land worth �100! The homeless and impoverished suffered, along with so many others, the ill effects of the war. They were left with no homes, money or no family. Was the end really worth the means? Maybe some other way could've been used to resolve the situation, all that we can do is learn about these terrible events and try our utmost to never let it happen again. ...read more.

**** 4 STARS
Well researched, well structured and concisely written. This would be an excellent revision resource or could be used as a framework for an essay. Easy to read with clear subheadings for different facets of WW1.