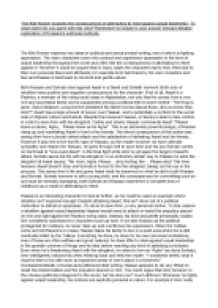 The Kite Runner explores the consequences of attempting to rebel against unjust leadership. To what extent do you agree with this view? Remember to include in your answer relevant detailed exploration of Hosseinis authorial methods.

﻿?The Kite Runner explores the consequences of attempting to rebel against unjust leadership.? To what extent do you agree with this view? Remember to include in your answer relevant detailed exploration of Hosseini?s authorial methods. The Kite Runner explores key ideas of political and social protest writing, one of which is fighting oppression. The main characters come into contact and experience oppression in the form of unjust leadership throughout the novel and often feel the consequences of attempting to rebel against it. However it could be argued that in many cases the characters fail to truly rebel due to their own personal flaws and attributes, for example Amir held back by his own cowardice and fear and Hassan is held back by his kind and gentle nature. Both Hassan and Sohrab rebel against Assef in a David and Goliath moment. Both acts of rebellion have positive and negative consequences for the character. First of all, Assef is a Pashtun, a member of the ruling racial class in Afghanistan, not only that he comes from a very rich and successful family and is supposedly among a political elite to some extent: ?The King is gone. Good riddance. Long live the president! My father knows Daoud Khan, did you know that, Amir?? Assef has a large amount of power over Hassan, and is potentially a symbol for the worst side of Afghani culture and beliefs. ...read more.

Everything he does, he does for his own personal motivations, even if those are often selfless and good natured, he does little to rebel against unjust leadership in the grander scheme of things and he dies before reaching any kind of satisfying conclusion. Even when he?s threatening Assef with the slingshot, he refers to him as ?Agha? (as does Sohrab), Amir intelligently notices this when thinking back and tells the reader: ?I wondered briefly what it must be like to live with such an ingrained sense of one?s place in a hierarchy?. Uncharacteristically of social and political protest writing, Hassan appears to do very lithely to resist the indoctrination and the prejudice placed on him. You could argue that Amir however is the obvious political protagonist in the novel, but his story isn?t much different. Whenever he fights against unjust leadership, his motives are explicitly personal in nature. For example if Amir really wanted to help save Afghanistan from oppression, he would?ve come back sooner to fight against the Taliban, he did no such thing. Farid, the man who helps Amir travel across the country, has lived through Afghanistan as a warzone and looks at Amir as a tourist, going as far to saying he has ?always been a tourist? in Afghanistan due to his privileged upbringing. Farid suggests Amir doesn?t understand the real Afghanistan and although Farid grows to earn respect for Amir. ...read more.

He is mentally traumatised by his own failure, the consequences are dire, Hassan loses his childhood in the process and will never be the same again. When Ali and Hassan are set on leaving, Amir can even see the hurt and hatred in Ali?s eyes: ?Ali glanced my way and in his cold, unforgiving look, I saw Hassan had told him.? For the reader this is infuriating and deeply sad, Ali is a lovely character, one who has always looked after Hassan and Amir. Hassan despite not being, is still like a son to this man, and the hurt and pain Amir causes is horrific for Amir and everyone involved. Baba?s ignorance to the situation and Hassan?s final sacrifice of saying he stole the watch and money really emphasises the unfairness of the situation. Hosseini does indeed explore the consequences of rebelling against unjust leadership, but at the end of the day the vast majority of this instances are motivated entirely by personal reasons and therefore are not fully explored in reference to social and political and protest writing. In fact both Amir and Hassan do little active rebellion against unjust leadership and the novel focuses on a lack of rebellion and the consequences of that just as much, if not more. The Kite Runner, while exposing us to many examples of rebellion therefore does not definitively explore these ideas enough to constitute itself as a true social and political protest novel. ...read more.