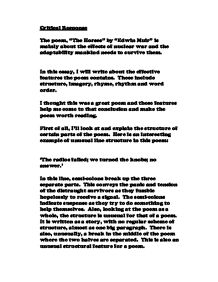 The poem, &quot;The Horses&quot; by &quot;Edwin Muir&quot; is mainly about the effects of nuclear war and the adaptability mankind needs to survive them.

Critical Response The poem, "The Horses" by "Edwin Muir" is mainly about the effects of nuclear war and the adaptability mankind needs to survive them. In this essay, I will write about the effective features the poem contains. These include structure, imagery, rhyme, rhythm and word order. I thought this was a great poem and these features help me come to that conclusion and make the poem worth reading. First of all, I'll look at and explain the structure of certain parts of the poem. Here is an interesting example of unusual line structure in this poem: 'The radios failed; we turned the knobs; no answer.' In this line, semi-colons break up the three separate parts. This conveys the panic and tension of the distraught survivors as they fumble hopelessly to receive a signal. The semi-colons indicate suspense as they try to do something to help themselves. Also, looking at the poem as a whole, the structure is unusual for that of a poem. It is written as a story, with no regular scheme of structure, almost as one big paragraph. ...read more.

Likewise, there is no repetitive rhythm in the poem or anything to suggest that it is a poem, other than that it is set out in lines and blank verses. This makes it more interesting to read and breaks it up into each point. This, in turn, makes it less boring. There are also a couple of examples of unusual word order in the poem, which make it worth reading. Here they are: 'If on the stroke of noon, a voice should speak.' This line contains unusual word order. I think it is written like this to emphasise the IF and STROKE OF NOON. This is to tell us that the radios are not likely to come back on so it is if and not when a voice speaks. Another example of this is in the line: 'Late in the summer, the strange horses came.' Yet again, this is an example of unusual word order. I think it has been written in this way to put emphasis on LATE IN THE SUMMER. I think that is to tell us that it is quite late on in the survivors struggle when the horses finally arrived to their rescue. ...read more.

This is a very moving gesture and the metaphor 'pierce our hearts' shows the survivors' extreme gratitude. It does not mean that their hearts are literally being pierced, but it is so moving that it has a dramatic affect on the hearts of the survivors. Although they are using the horses for labour, they still admire them for giving of themselves to help humans. I enjoyed this poem because the language used in it helps you to understand it by forming a picture in your head. Instead of having to think hard about the meaning, it sort of jumps out at you. The poet is very euphemistic in the way he describes the war, as I mentioned earlier. He explains clearly what the survivors had to do to go on without modern conveniences. Their radios had broken and tractors were useless without fuel. They had to turn to horses once again to plough their fields. This shows that no matter how much we advance, we will always need horses (or something from the natural world) at some point to survive. All these things come together to make this poem one which is enjoyable to read and also to write about. Damien Hendry 3H ...read more.