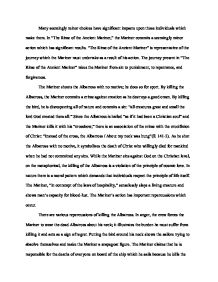 The Rime of the Ancient Mariner - minor choices and significant impacts

The sun beats down on the Mariner with its rays and the Mariner feels the taunting of the endless sight of water which he cannot drink. Nature is the force that has the power to decide what is right or wrong and how to deal with the actions. The Mariner receives a sufficient punishment: "I looked upon the rotting sea, and drew my eyes away; I looked upon the rotting deck, and there the dead men lay." As all the crew members die and the Mariner lives on, the Mariner witnesses the curse in the eyes of the crew's corpses, whose last expressions remain upon their faces, for seven days and nights. As the bird falls into the water, it demonstrates the change from punishment to penance. As Life-in-Death wins the game, the sailors drop down dead. The Ancient Mariner is now "Alone, alone, all, all alone." The period of "horrible Solitude" produces repentance and regret. ...read more.