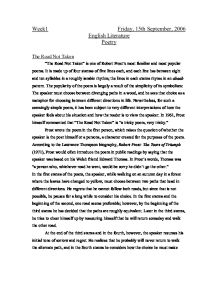 The road not taken

Week1 Friday, 15th September, 2006 English Literature Poetry The Road Not Taken "The Road Not Taken" is one of Robert Frost's most familiar and most popular poems. It is made up of four stanzas of five lines each, and each line has between eight and ten syllables in a roughly iambic rhythm; the lines in each stanza rhyme in an abaab pattern. The popularity of the poem is largely a result of the simplicity of its symbolism: The speaker must choose between diverging paths in a wood, and he sees that choice as a metaphor for choosing between different directions in life. Nevertheless, for such a seemingly simple poem, it has been subject to very different interpretations of how the speaker feels about his situation and how the reader is to view the speaker. In 1961, Frost himself commented that "The Road Not Taken" is "a tricky poem, very tricky." Frost wrote the poem in the first person, which raises the question of whether the speaker is the poet himself or a persona, a character created for the purposes of the poem. According to the Lawrance Thompson biography, Robert Frost: The Years of Triumph (1971), Frost would often introduce the poem in public readings by saying that the speaker was based on his Welsh friend Edward Thomas. ...read more.

Changing his mind again, he believes that in the future he will look back, realize that he did take the "less traveled" road after all, but regret "with a sigh" that that road turned out to have made "all the difference" in making his life unhappy. The speaker believes that in the future he will be haunted by this earlier moment when he made the wrong choice and by the unfulfilled potential of "the road not taken." In contrast to the speaker, Frost uses metaphor to "say one thing and mean another." That is, Frost presents this speaker's account of his situation with deadpan solemnity, but he uses the speaker as a specific image of a general way of thinking that Frost means to mock. The speaker first grasps at small details in the landscape to help him choose the better path, then seems to have the common sense to see that the two roads are essentially equivalent, but finally allows his overanxious imagination to run away with him. The reader is meant to smile or laugh when the speaker scares himself into believing that this one decision, with its options that seem so indistinguishable, will turn out someday to be so dire as to make him "sigh" at "all the difference" this choice has made. ...read more.

One problem with this view is that the speaker can hardly be praised as a strong nonconformist if in the middle of the poem he can see little difference between the paths, let alone vigorously choose the road "less traveled." Another problem is that he imagines telling his story in the future with a "sigh," an unlikely gesture for a vigorous champion of nonconformity. In 1935, Frost wrote on the subject of style that "style is the way [a] man takes himself....If it is with outer seriousness, it must be with inner humor. If it is with outer humor, it must be with inner seriousness. Neither one alone without the other under it will do." "The Road Not Taken" is a notable example of Frost's own sophisticated style, of his ability to create ironic interplay between outer seriousness and inner humor. Yet the humor of the poem also has its own serious side. This humor conveys more than merely the ridicule found in parody: It also expresses an implied corrective to the condition that it mocks. This condition is that the speaker sees the course and tone of his life as determined by forces beyond his range of vision and control. Frost implies that if the speaker were able to see himself with some humor, and if he were able to take more responsibility for his choices and attitude, he might find that he himself could make "all the difference" in his own life. ...read more.