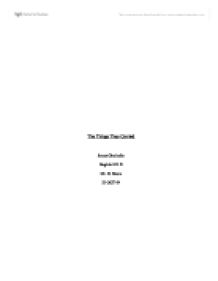 The Things They Carried

The Things They Carried James Oberhofer English 101 D Mr. B. Moon 22-OCT-04 O'Connor remarks "The Things They Carried" is a short story that is written "as an experience not an abstraction" and that "the meaning has been embodied in it". These quotations are truly pure in description and interpretation of the short story as the reader, must look beyond the crude physical properties of the objects and actions chronicled and focus more upon their hidden meanings and messages. O'Brien uses the physical characteristics of weight to make an impact upon the reader to relate with the men. In emphasizing the soldier's everyday burden, the reader can easily relate to the situation in general. As the story progresses, the main attention of the story transfers from a physical sense of weight to an emotional sense of burden. It is through this shift that "the meaning is truly embodied in the story". This shift shall be focused on and elaborated in this essay. ...read more.

that the physical hardships of the men are truly described. The emotional weight that each man endured is also described, but in a more profound amount of mind compelling detail. In the description of what Ted Lavendar was carrying at the time of his death, the author describes the usual flack jacket and helmet, but also his "unweighed fear". Truly, this unweighed fear is captured in the quote "They carried all they could bear, and then some, including a silent awe for the terrible power of the things they carried". The meaning of this is that the men could hide their feelings in their equipment, but were actually at all times just as likely to be killed as Ted Lavendar was. This "unweighed fear" was truly a characteristic that all men possessed at a most extreme degree. This unweighed fear is also beautifully defined at the moment Lavendar goes down in the hole to search for the enemy. ...read more.

"They carried the soldier's greatest fear - blushing". Their reputations were continually on the line. As Lt. Cross detaches himself from Martha, he can maintain his reputation as a respectable leader and perhaps gain a sense of reality among all of this. In shedding his emotions, Cross hopes that he may attain a sense of order with in himself emotionally and therefore bring him a personal comfort after being emotionally torn apart for so long. It is proven that meaning of the story is truly embodied in it that because one begins to truly feel for their characters and feel their emotional hurt. As one begins to understand the detachment of Cross and Martha, one understands that a man can not live in a fantasy world all of his life in false happiness. This story is very compelling in showing the dependency that Cross first shows and finally his independence of Martha. The story makes very effective use of description and continually keeps the story interesting and understandable for the reader. ...read more.