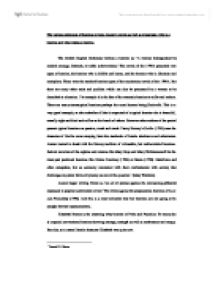 The various portrayals of heroines in Jane Austen's novels as well as investigate, who is a heroine and what makes a heroine.

The various portrayals of heroines in Jane Austen's novels as well as investigate, who is a heroine and what makes a heroine. The Oxford English Dictionary defines a heroine as: 'A woman distinguished by exalted courage, fortitude, or noble achievements.' The novels of the 1790's presented two types of heroine, the heroine who is fallible and learns, and the heroine who is Christian and exemplary. These were the standard heroine types of the reactionary novels of the 1790's. But there are many other traits and qualities which can also be possessed by a woman to be described as a heroine. For example it is the fate of the romantic heroine to suffer and endure. There are many stereotypical heroines perhaps the most famous being Cinderella. This is a very good example, as she embodies all that is expected of a typical heroine- she is beautiful, morally right and kind and suffers at the hands of others. However other authors of the period present typical heroines as passive, weak and meek. Fanny Burney's Cecilia (1782) sees the character of Cecilia never straying from the standards of female obedience and submission. Austen wanted to break with the Burney tradition of vulnerable, but noble-minded heroines. Radical novelists of the eighties and nineties like Mary Hays and Mary Wollstonecraft for the most part produced heroines like Emma Courtney (1796) or Maria (1798). Rebellious and often outspoken, but so seriously concerned with their confrontation with society that challenges to pettier forms of tyranny are out of the question.' (Mary Waldron) Austen began writing fiction as 'an act of protest against the unmeaning gibberish expressed in popular sentimental novels'1 She wrote against the preposterous heroines of Love and Friendship (1790). And this is a clear indication that her heroines are not going to be straight forward representations. Elizabeth Bennet is the charming witty heroine of Pride and Prejudice. To many she is a typical conventional heroine showing courage, strength as well as exuberance and energy. ...read more.

Catherine similarly on her introduction into the world is not like Emmeline the conventional heroine at the time who knows instinctively the right moves to make. When Henry Tilney parodies the fashionable preoccupations of the average novel-heroine, she reacts in amused disbelief because so far she thinks of such behaviour as occurring only between the covers of a book (26-27). Compared to Jane Austen's later heroines Catherine Morland is somewhat Proffessor Mudrick remarks 'too simple and too slight, too narrowly a symbol of the author's rejection of romantic nonsense to assert the claim of personal feeling and value beyond mere function'6. Howells writes of her 'Catherine Morland is a goose, but a very engaging goose..and in spite of her romantic folly she has so much good heart that it serves her in place of good sense'7. It seems to me that both these critics rather miss the point about Catherine, and her inadequacies as a heroine. Her inadequacies are there because Jane Austen uses her to establish her as a gooselike parody of the sentimental-gothic heroine. She can be seen to be a type of caricature of the conventional heroine. In spite of this however Catherine still has qualities associated with the heroine. For example Catherine has physical energy and exuburance seen with her walks with the Tilneys and the energy she displays throughout the novel corresponds with Jane Austen's heroines such as Elizabeth and Emma. Catherine is Jane Austen's most innocent heroine, she has none of the certainty of Elizabeth, none of the gentler perception of Anne Elliot, none of the righteous of Fanny Price. She is closer in nature to Harriet Smith of the novel Emma. Critic Norman Sherry thinks the character of Miss Tilney has all the virtues of taste, manners, judgement and correct behaviour. She is a little too good too be true, and ironically in this way approximates most closely to the fictionally heroine. ...read more.

Jane Austen's characters are instruments of a profound vision, she laughs at man and examines humanity closely. Jane Austen's heroines are not idealised creatures, they are credible human beings. Thomas Baginaton Macaulay 1843 wrote 'she has given us a multitude of characters, all in a certain sense common-place, all such as we meet every day'13. The heroines are truly loveable flesh and blood young women. Emma and Elizabeth can in fact 'be seen as the prototypes of a distinguished line of heroines who are active shaping forces in their fictional worlds rather than passive victims in the tradition of Samuel Richardson's Pamela and Clarissa'14. Jane Austen's heroine it could therefore be said is within our 'physical space whereas for example Richardson's is still suspended on the wall of romance'15. Her portray of her different heroines is like a discussion and investigation into the different natures of women. However it can be said that Jane Austen is happiest and her heroines are more ideal and popular when she deals with the flawed but vivacious character like Emma and Elizabeth. The good character such as Fanny and Elinor are in a secondary position. But to many readers however the character which epitomises perfectly the idea of a heroine is Elizabeth. Elizabeth' s sense and conduct are of a superior order to those of the common heroines of novels. From her independence of character which is kept within the proper limits of decorum and her well- times sprit. Elizabeth is also rewarded with the most glorious match in all of Jane Austen's novels, and the question can therefore be asked is this the best reward for Jane Austen's most radiant and best heroine? 1 Donald D. Stone 2 Bradbrook 3 Memoir of Jane Austen, ed. R. W. Chapman, p157 4 Bardbrook 5 Marilyn Butler 6 Andrew Wright 7 Andrew Wright 8 Donald Stone 9 Juliet Mcmaster 10 John Bailey, Introduction to Jane Austen (London, 1931) 94 11 Gille 12 Jane Austen; Northanger Abbey an Persuasion B.C Southam 13 Reference on Judith O'Neill 14 Elizabeth Jean Sabiston 15 Gillie ...read more.