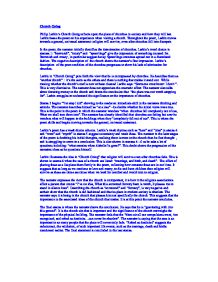 Philip Larkin’s Church Going reflects upon the place of churches in society and how they will last. Larkin bases the poem on his experience when visiting a church. Throughout the poem, Larkin moves towards a general, universal statement: religion will survive, even after churches fall into disrepair.

In the poem, the narrator initially identifies the deterioration of churches. Larkin’s word choice in stanzas 1: “brownish”, “musty” and  “sprawlings” give the impression of something uncared for. Brownish and musty , in particular suggest decay. Sprawlings connotes spread out in a disordered fashion. The negative description of  the church shows the narrator‘s first impression. Larkin’s description  of the poor condition of the churches progresses to show his lack of admiration for churches.

Larkin in “Church Going” puts forth the view that he is unimpressed by churches. He describes them as “another church” :  it’s the same as the others and there is nothing that makes it stand out.  While musing whether the church‘s roof is new or been cleaned Larkin says: “Someone must know: I don’t ”. This is very dismissive. The narrator does not appreciate the cosmetic effort. The narrator also talks about donating money to the church and draws the conclusion that  “the place was not worth stopping for”. Larkin struggles to understand the significance or the importance of churches.

Stanza 3 begins “Yet stop I did” showing to the reader an immediate shift in the narrators thinking and attitude. The narrator describes himself as “at a loss” - he doubts whether his initial views were true. This is the point in the poem in which the narrator wonders “when  churches fall completely out of use, What we shall turn them into”. The narrator has already identified that churches are fading but now he wonders what will happen to the buildings when they “completely fall out of use”. This is where the poem shifts and begins moving towards the general, universal statement.

Larkin’s poem has a weak rhyme scheme. Larkin’s weak rhymes such as “here” and “idea” in stanza 6 and “were” and “myrrh” in stanza 5 suggest uncertainty and weak ideas. The narrator in the later stages of the poem is doubting his initial thoughts, realising there is more to the church than he first thought , and is struggling to come to a conclusion. This is also shown in stanzas 4 - 6 as he asks a lot of questions including: “what remains when disbelief is gone?”. This doubt shows the progression of the narrators ideas as he questions himself.

Larkin illustrates the idea in “Church Going” that religion will survive even after churches fade. This is shown in stanza 6 when the uses of a church are listed: “marriage, and birth, and death”.  The effect of placing these as a list place them firmly in the poem, reflecting how constant these are in our lives. It suggests that as long as we continue to love and marry, to die and have children then religion will survive as these are times are times when we look for comfort and would turn to religion.

The narrator expresses the view that the church is unimportant, it is how it the religious associations affect a person that counts “I‘ve no idea, What this accoutred frowsty barn is worth, It pleases me to stand in silence here”. Describing the church as “accoutred” and “frowsty”, is very negative and archaic show that the church is old fashioned and that its place in modern society is obsolete. The narrator says it is being in the church that pleases him not specifically the church. This suggests that the importance is the associated ideas of the church that matter. It is at this point the narrator concludes.

The final stanza is where the narrator draws the conclusion. He says that he is “gravitating with it to this ground”. It is the church site that is important and the significance of the church outweighs the importance of the physical building. The narrator feels that the “blent air all our compulsions meet, Are recognised, and robed as destinies…can never be obsolete”. The narrator is saying that the area is so important to so many people that the place will never truly fade. “Robed as destinies” suggests the ordainment, the validation, of such important life events, such as the marriage, death and births mentioned earlier. The final statement is concluded in the last stanza.