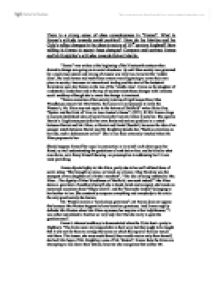 There is a strong sense of class consciousness in &quot;Emma&quot;. What is Emma's attitude towards social position? How do the Martins and the Cole's reflect changes in the class structure of 19th century England?

There is a strong sense of class consciousness in "Emma". What is Emma's attitude towards social position? How do the Martins and the Cole's reflect changes in the class structure of 19th century England? How willing is Emma to accept these changes? Compare and contrast Emma and Mr Knightley's attitudes towards Robert Martin. "Emma" was written at the beginning of the Nineteenth century when dramatic change was going on in social structures. Up until then society was governed by a rigid class system and mixing of classes was very rare, however the 'middle class', the land owners and work-force owners were beginning to carve their own place in society. Increases in international trading and the start of the Industrial Revolution were key factors in the rise of the 'middle class'. Emma as the daughter of a substantial landowner and at the top of society resists these changes with immense social snobbery although she is aware the change is imminent. "Emma conceives of her society in terms of rigid inequalities; Miss Woodhouse cannot visit Mrs Martin, the Coles will not presume to invite the Weston's, Mr. ...read more.

Emma's inherent snobbery is demonstrated when the Coles host a party in Highbury. "The Coles were very respectable in their way, but they ought to be taught that it was not for them to arrange the terms on which the superior families would visit them. This lesson, she very much feared, they would receive only from herself; she had little hope of Mr. Knightley, none of Mr. Weston". Emma feels the Coles are attempting to rise above their station; however she recognizes that neither Mr. Knightley nor Mr. Weston will agree or support her here because as Robert Miles writes, "they have better judgement...Knightley's flexibility absorbs the threat, whereas Emma's stiffness augurs friction" (Jane Austen [Northcote House, 2003], p.105) Emma's dislike of the Coles stems from their recently acquired wealth: "They...by this time were, in fortune and style of living, second only to the family at Hartfield." High rank in society was dictated more by family history than current wealth. Hereditary wealth was perceived as infinitely superior to recently earned 'new money'. However, change was imminent with the increase in trade wealth and the upper class had to accept this, some even embraced it, Emma however refuses to accept these changes and adapt to this new way of thinking. ...read more.

He must have a pretty good opinion of himself." This shows humour and irony because what Emma says is very spiteful and untrue (although she does not mean it to be so), but also hypocritical because she has an extremely high opinion of herself. Mr. Knightley, on the other hand, has a high regard for Mr. Martin and his family; "I never hear better sense from any one than Robert Martin. He is an excellent young man both as son and brother." Mr. Knightley is outraged when he learns of Harriet's refusal. He is a realistic, sensible man and knows Martin is a good, respectable match for Miss Smith. "Robert Martin's manners have sense, sincerity and good-humour to recommend them; and his mind has more true gentility than Harriet Smith could understand." Emma, although aware changes in social position are happening and being accepted, is reluctant to change, and as the first lady of Highbury does not welcome the break-down of the rigid class structure. The Martins and the Coles represent these changes and we see them accepted warmly by nearly everyone except Emma. Characters such as Mr. Knightley and Mr. Weston are much more realistic, with a wider understanding of social issues than Emma, who has never left Highbury. Anna Mackie ...read more.