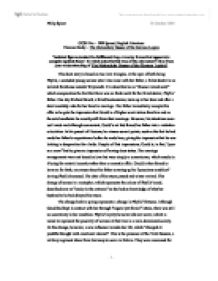 Thomas Hardy - 'Isolated figures denied the fulfilment they crave by forces that appears to conspire against them'. To what extent is this true of the characters' lives from your understanding of The Melancholy Hussar of the German Legion?

GCSE Pre - 1900 (prose) English Literature Thomas Hardy - The Melancholy Hussar of the German Legion 'Isolated figures denied the fulfilment they crave by forces that appears to conspire against them'. To what extent is this true of the characters' lives from your understanding of The Melancholy Hussar of the German Legion? This short story is based on two love triangles, at the apex of both being Phyllis, a secluded young woman who lives alone with her father, a failed doctor in an isolated farmhouse outside Weymouth. It is described as an "obscure island nook" which encapsulates the fact that there was no fresh work for the failed doctor, Phyllis' father. One day Richard Gould, a failed businessman, turns up at her door and after a short courtship asks for her hand in marriage. The father immediately accepts this offer as he gets the impression that Gould is of higher social status than him and as the sole benefactor he would profit from their marriage. However, his intentions were well made and although convenient, Gould's act had forced her father into a mistaken calculation. In his pursuit of illusions, he misses several points, such as the fact he had made her father's acquaintance before he made hers, giving the impression that he was looking in desperation for a bride. ...read more.

She had been delayed by chance and Matthaus waited at the gate for her. The time he was due back in camp came and went but still he stayed. When she finally met him he was extremely late and on his return she heard that he had been stripped of his rank. The tragic consequence of this was that the chances of her father letting her marry him if Gould did not materialise had been slim but now they were practically nil. It was at this point that she makes one of the greatest decisions of her life. Matthaus had suggested that he was planning an escape from the army with several close companions and return to Germany and his mother. At first she seems amazed but then uncertainty steps in "I fear I am ruining you and your prospects". However eventually she was persuaded but questions their route to freedom and how they propose to achieve it. Their scheme included stealing a boat and crossing across the channel to France. Here they would hike to Germany using their army wages to buy food and shelter. He asks to meet her just off the highway (symbolic of a turning point in her life) ...read more.

It turned out it was Guernsey and the men were arrested and sent back to England so it was ironic that this mission that this mission seemed doomed to failure. It was simply undeserved misfortune they had arrived in the wrong place and a fault in navigation. On arrest, they had sacrificed themselves for the two other comrades by claiming to be ringleaders. Whilst the others had received a flogging, the punishment for desertion was death and so this order was carried out. As a consequence Phyllis symbolically died of a broken heart and was buried near where the two men lie. The idea of the love triangles that was stated at the start of this essay are the heart of the story. At the centre of both is Phyllis but on one is Gould and Dr. Grove her father. On the second is Matthaus and his mother, who Phyllis longs to be with. This story is an example of the number of external factors that can shape peoples destinies in life. It shows how chance events, such as Phyllis sitting on the wall at the time of Matthaus' arrival along with tragic circumstances that arise, can affect the course of change. The idea is that we are powerless to control our destiny, and seeming coincidences may appear to be pre-ordained but fate is out of our control. Philip Spicer 10 October 2003 - 1 - ...read more.