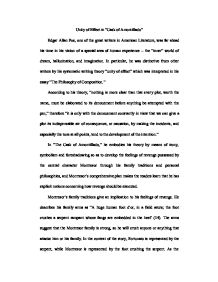 Unity of Effect in Cask of Amontillado

Unity of Effect in "Cask of Amontillado" Edgar Allan Poe, one of the great writers in American Literature, was far ahead his time in his vision of a special area of human experience -- the "inner" world of dream, hallucination, and imagination. In particular, he was distinctive from other writers by his systematic writing theory "unity of effect" which was interpreted in his essay "The Philosophy of Composition." According to his theory, "nothing is more clear than that every plot, worth the name, must be elaborated to its denouement before anything be attempted with the pen," therefore "it is only with the denouement constantly in view that we can give a plot its indispensable air of consequence, or causation, by making the incidents, and especially the tone at all points, tend to the development of the intention." In "The Cask of Amontillado," he embodies his theory by means of irony, symbolism and foreshadowing so as to develop the feelings of revenge possessed by the central character Montresor through his family traditions and ...read more.

Montresor made a number of physical preparations beforehand that ensured the success of his plan, including the first necessary step of carving a niche out of the walls of the catacombs with chain and padlock to secure Fortunato, and the second necessary step of carrying a trowel with him to wall up the entrance of the niche. Besides physical preparations, Montresor was prepared to use Fortunato's own thoughts against him. Montresor was so familiar with Fortunato's character and personality that he knew what he needed to get Fortunato in the palm of his hand. For one thing, Fortunato was viewed as an expert on wine, and Montresor knew that he would not be able resist the temptation of Amontillado. Montresor also knew that Fortunato was not a simple-minded man and would not willingly follow Montresor into the catacombs, and he knew that he needed to influence Fortunato's judgment. Therefore, Montresor used the Amontillado as bait to lure Fortunato into the catacombs and his death. ...read more.

Second, the process that Montresor brings Fortunato deep underground into the catacombs is symbolic of the two men on a trip to hell, or perhaps just Montresor taking Fortunato to hell. Third, when Fortunato directly states "I shall not die of a cough," Montresor says in response, "True" (13), acknowledging the fact that he knows Fortunato will not die of a cough but die of his vanity. Based on Poe's "unity of effect" theory, there is no denying that every word or phrase, every detailed description, and every rhetorical device in the short story perfectly echoes its significant theme -- defects in the deeper heart of human being. Through quite a lot of irony and foreshadowing, obvious and subliminal, Poe delves into the mind of his quirky characters and creates an entertaining and intriguing piece of fiction, and eventually gives the reader a feeling of both physical and mental torture. ?? ?? ?? ?? ...read more.