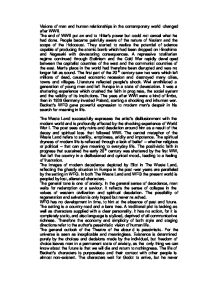 Waiting For Godot and The Waste Land

Visions of man and human relationships in the contemporary world changed after WWII. The end of WWII put an end to Hitler's power but could not cancel what he had done. People became painfully aware of the nature of Nazism and the scope of the Holocaust. They started to realize the potential of science capable of producing the atomic bomb which had been dropped on Hiroshima and Nagasaki with devastating consequences. A repressive totalitarian regime continued through Stalinism and the Cold War rapidly developed between the capitalist countries of the west and the communist countries of the east. Man's place in the world had therefore been disrupted and was no longer felt as sound. The first part of the 20th century saw two wars which left millions of dead, caused economic recession and destroyed many cities, towns and villages. Literature reflected people's shock. Wwi annihilated a generation of young men and left Europe in a state of devastation. It was a shattering experience which crushed the faith in progress, the social system and the validity of its institutions. ...read more.

It has no action, for it is completely static, and also language is stylized, deprived of all communicative richness. Therefore the economy and simplicity of both style and staging directions refer to the author's pessimistic vision of human life. The general outlook of the Theatre of the absurd is pessimistic. For the universe is seen as inexplicable and meaningless. Existence is determined purely by the choices and decisions made by the individual, but freedom of choice leaves man in a permanent state of anxiety, as the only thing we can know about the future is that we will die and return to nothingness. The life of Beckett's characters is purposeless and their contact with other people is almost non-existent. The characters wait for Godot to arrive, but he never does and nothing is learnt about who he is or if he really exists. Much of the dialogue is repetitive and meaningless. The characters' behaviour can't be understood. There is no plot with a beginning, a middle and an end. The style is surreal. ...read more.

They spend their time talking purposelessly, waiting for someone who could solve their problems but never comes. Their repetitive ritual of gestures and actions is a symbol of the meaninglessness of human existence in the void of values left in modern society after WWII. Language is no longer a means of communication and underlines lack of communication instead. The play reflects the nightmares created by a spiritual wasteland. It gave voice to the anguish of the audience who had lived through the tragedy of WWII and the nightmarish dropping of atomic bombs in Japan in 1945. The sterility of the modern world described in the Waste Land is recalled in the bare setting of WFG, adorned of a single tree which seems to be alive, because it has four or five leaves, but doesn't give the solace of nature, only misery and a metaphor of impending suicide, which reveals all its uselessness. Therefore, "The waste land" is a comment on the futility of civilization after WWI and the emptiness and confusion of contemporary life. Similarly, Beckett's WFG, with its broken dialogues, full of pauses and silence, expresses the void which is slowly swallowing the modern world. ...read more.