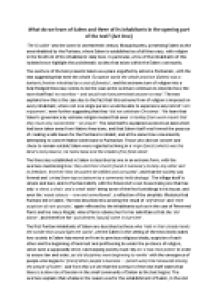 What do we learn of Salem and three of its inhabitants in the opening part of the text? (Act One)

﻿What do we learn of Salem and three of its inhabitants in the opening part of the text? (Act One) ?The Crucible? sets the scene in seventeenth century Massachusetts, presenting Salem as the area inhabited by the Puritans, where Salem is established as a full theocracy, with religion in the forefront of the inhabitants? daily lives. In particular, a few of the inhabitants of this isolated town highlight the problematic society that exists within the Salem community. The overture of the text presents Salem as a place engulfed by extreme Puritanism, with the text suggesting that even the whole ?European world the whole province (Salem) was a barbaric frontier inhabited by a sect of fanatics?, and this extreme turn of religion into a fully-fledged theocracy seems to be the case as the overture continues to describe how the town itself had ?no novelists ? and would not have permitted anyone to read?. The text explains how this is the case due to the fact that this extreme form of religion is imposed on every inhabitant, where not one single person would be able to experience any kind of ?vain enjoyment?, even further suggesting that they ?did not celebrate Christmas?. We learn that Salem?s governance by extreme religion means that even ?a holiday from work meant that they must only concentrate?on prayer?. ...read more.

Parris? own background is noted as him previously being a merchant, a character interested in self-profit, clearly not suited for being a religious leader, with Proctor continuing to describe Parris as ?hardly ever [mentioning] God anymore? in his preaching. His selfishness also becomes evident as he begins bickering about his supply of firewood, where he argues that his ?contract provides?all?firewood? for his household, and yet he has apparently been ?waiting since November for a stick?, and has been reduced to a ?London beggar? by doing so. Notably the comparison to a ?London beggar? which he makes of himself goes against the nature of Puritanism and Christianity itself, and clearly Parris becomes an increasingly contradictory character. This is further continued in the conversation when Proctor points out that he is ?the first ever minister (that) ever did demand the deed to this house?, against the tradition of the community. This land-lust is also a highlight of the emerging breakdown in Salem?s community, where self-profit and motivation begin to emerge into the centre-stage. Another of the first individuals to be presented in the text, Abigail is quickly established as a character of deceit and lies, with ?an endless capacity for dissembling?. This skill is quickly shown within the first lines of speech in the act as Parris? demands that he ?must know? what sort of actions Abigail committed when Parris discovered her in the forest dancing. ...read more.

Proctor is notably described as having the ability to expose flaws in others, as well as stand up for his own rights, demonstrated in his conversation with Putnam as he rightfully states that he ?bought that tract from Goody Nurse?s husband?, and that Putnam?s grandfather ?had a habit of willing land that never belonged to him?. His ability to expose the inherent flaws in the society leads him to build upon the idea that Salem?s community is one built on a vestige of lies and descending into mass hysteria; he states to the Reverend Hale that he has heard that Hale is a ?sensible man? and maybe he would ?leave some of it (sensibility) in Salem?. The Salem in the time of the text is presented as an isolated village, rooted deep in Puritanism with the community supposedly unified as one ?from top to bottom? on the basis of religion. However, we quickly learn that this is not the case as the society that exists in Salem during the beginning of the text has already had its disciplines put to the test, only to end in failure, demonstrated by the by-products of this drastic failure in the form of Abigail, Proctor and the Reverend Parris himself, all of which who contradictorily push against the very rules and traditions of Puritanism: breaking the commandments, encouraging witchcraft, use of false accusations, hypocrisy, and the overwhelming self-interest which the text suggests will only leave destruction in its path, namely the mass hysteria of the witch hunt. ...read more.