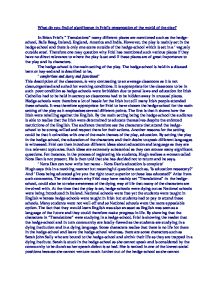 What do you find of significance in Friel's presentation of the world of the play?

What do you find of significance in Friel's presentation of the world of the play? In Brian Friel's " Translations" many different places are mentioned such as the hedge-school, Baile Beag, Ireland, England, America and India. However, the play is mainly set in the hedge-school and there is only one scene outside of the hedge-school which is set in a ' vaguely outside area'. Therefore one may question why Friel has mentioned such various places if they have no direct relevance to where the play is set and if these places are of great importance to the play and its characters. The hedge-school is the main setting of the play. The hedge-school is held in a disused barn or hay-sed and is described to be, ' comfortless and dusty and functional' This description of the classroom, is very contrasting to an average classroom as it is not clean,organised and suited for working conditions. It is appropriate for the classroom to be in such poor condition as hedge-schools were forbidden due to penal laws and education for Irish Catholics had to be held in secrecy so classrooms had to be hidden away in unusual places. Hedge-schools were therefore a lot of hassle for the Irish but still many Irish people attended these schools. It was therefore appropriate for Friel to have chosen the hedge-school for the main setting of the play as it emphasises several different points. ...read more.

It is also clear that it does not really matter that the audience never see the actual events as characters such as Bridget come in to the hedge-school and tell the other characters the details of such events. It is also significant for Friel to mention Baile Beag as Baile Beag is portrayed as a dying town and therefore highlights the bad situation for those attending the hedge-school to a further extent. Characters that cannot escape Baile Beag such as Jimmy Jack and Hugh are also shown to be trapped and cannot make any progress with their lives. A perfect example of this is when Hugh and Jimmy Jack are speaking of past conflicts with the English. In 1798 Jimmy Jack and Hugh had been called to fight for their country . Hugh describes how Jimmy Jack and himself had been brave and marched twenty-three miles away from their town. The two however then got, ' homesick for Athenes, just like Ulysses. The desiderium nostrorum - the need for our own'. The two therefore are incapable of leaving their dying town and so suffer the consequences. Jimmy Jack, so lost in Greek texts that he has lost touch with reality and Hugh, is always drunk and a bad father to one of his sons. It is clear that by mentioning Baile Beag Friel is able to show the audience or reader how being attached to certain places in the play can affect a character's life and future. ...read more.

Countries outside Europe all together are also significant to the play as they introduce Friel's pattern of, the futher you move away from the hedge-school and Baile Beag, the more success you will have in life. Another pattern that emerges from the different places in the play is that there are borders between each places. To get from Baile-Beag to Ireland you cross over from a rural, traditional place to a more commerical, industrial place and order to cross this boundry you must have determination and courage to be away from your own people and family. From Ireland to England, you cross the boundaries of language and culture and from Ireland or England to America or India, you must be able to have a great amount of courage, practicallity and a desire to expand your knowledge. Some characters are able to cross the boundaries quite easily, like Owen who could move in and out of the community of Baile Beag however there are other characters such as Hugh who have tried to get outside Baile Beag but have failed and as a consequence have less successful lives. By mentioning all these different places, Friel also gives a better understanding of the characters that are associated with the different places. For example Sarah is associated with the hedge-school and is not socially accepted and does not have a rich or respectable lifestyle, whereas Lancey is associated with England and has an enormous amount of power, respect and a good lifestyle. ...read more.